One of the major issues among Central Government employees has been settled through the order issued by DoPT on 19 February 2020. The Govt has decided to grant one-time relaxation to such Government employees who had availed Leave Travel Concession by air tickets booked through Private Airlines or unauthorized travel agents. The relaxation for the period between January 2010 and June 2014 only.

Clarification regarding relaxation of purchase of air tickets from authorized Travel Agents for the purpose of LTC. 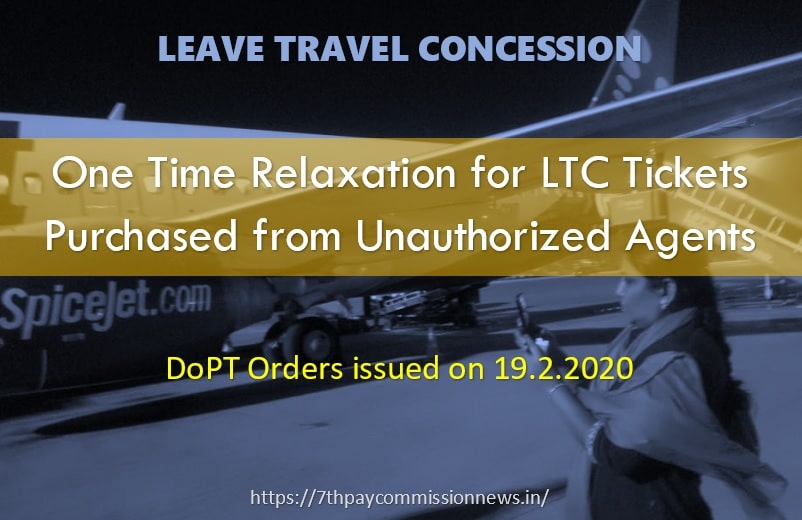 Subject:- Clarification regarding relaxation of purchase of air tickets from authorized Travel Agents for the purpose of LTC.

The undersigned is directed to refer to this Department’s O.M. No. 31011/4/2014- Estt.A-IV dated 19.06.2014 and subsequent O.M. regarding the procedure for booking of air tickets on LTC and to say that as per the extant instructions, whenever a Government servant claims LTC by air, he/she is required to book the air tickets directly from the airlines (Booking counters, website of airlines) or by utilizing the services of the authorized travel agents viz. ‘M/s Balmer Lawrie & company’, ‘M/s Ashok Travels & Tours’ and ‘IRCTC’ (to the extent IRCTC is authorized as per DoPT O.M. No. 31011/6/2002-Est(A) dated 02.12.2009) while undertaking LTC journey(s).

2. In this regard, many cases pertaining to the period of 2010-13 have been reported in this Department where Government employees had traveled on LTC by air to visit Jammu & Kashmir (J& K) and North-East Region (NER) under the special dispensation scheme after booking the tickets through private travel agents due to lack of awareness of rules at that time. It has been observed that claims of these Government servants were initially settled by the administrative authorities. However, after few years when the audit authorities noticed the lapses, objections were raised on these claims and recoveries were ordered in such cases along with charging of penal interest. In view of the financial hardships caused to these individuals, huge demands are being received from Ministries/ Departments and JCM for grant of one time relaxation in these cases.

3. The matter has been considered in this Department in consultation with Joint consultative Machinery – staff side and Department of Expenditure. It has been decided to grant one time relaxation to such Government employees who had availed LTC by air to visit J& K and NER during the period of January, 2010 – June, 2014 and booked the tickets through travel agents other than ‘M/s Balmer Lawrie & company’, ‘M/s Ashok Travels & Tours’ and ‘IRCTC’ due to lack of awareness of rules.

Such relaxation shall be granted with the concurrence of Financial Advisor of the concerned Ministry/ Department. Fulfillment of fare limit of LTC-80 and other LTC conditions prevalent at the time of performance of journey by the Government servants may be ascertained before granting such relaxations. The Administrative Ministries/ Departments shall also ensure that only those cases are considered for relaxation where it is established that bonafide mistake has occurred and no undue benefit has accrued to/obtained by the Government servant.

4. Further, in this regard, it is reiterated that the extant instructions regarding booking of air tickets on LTC journey through authorized modes should be strictly complied with. It is seen that despite reiterating the above provisions from time to time, this Department is still in receipt of cases seeking relaxation for booking of tickets from private travel agents on the grounds of lack of awareness of rules and work-exigencies. Therefore, Ministries / Departments are again advised to ensure wide circulation of this Department’s instructions issued vide O.M. No. 31011/2/2018-Estt.A-IV dated 10.12.2018, among their employees.

sd/-
(Surya Narayan Jha)
Under Secretary to the Government of India

Clarification on purchase of Air Tickets from Unauthorized Agents Relaxation for purchase of Air-Tickets on TA (Transfer) from Private Agents: CBDT Order Instructions on booking of tickets from an agency other than the authorized Travel agents Clarification for booking of air-tickets on LTC – Dopt issued on 23.9.2015 Booking of Air-Tickets on LTC – DoPT Orders Dt.10.12.2018 Relaxation to travel by private airlines to visit J&K – Dopt orders on 28.11.2014 One Time Relaxation to CG Employees availed LTC-80 and traveled by Air ticket other than Authorized agents