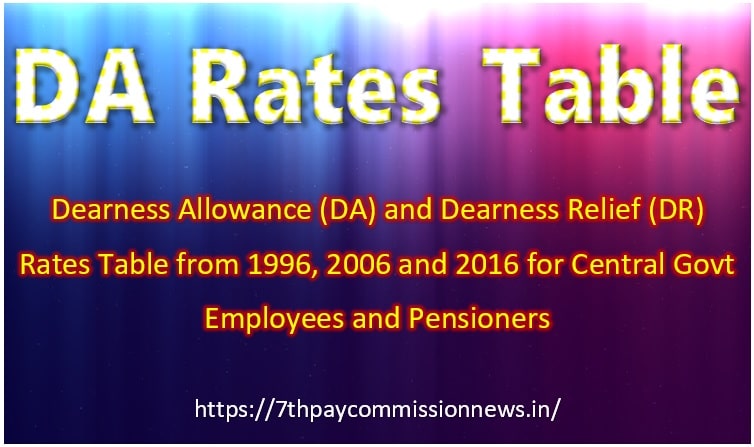 What is DA and DR?

Dearness Allowance (DA) and Dearness Relief (DR) both are the same. Dearness allowance and Dearness relief are being granted to existing employees and retired employees respectively. Dearness allowance is calculated on the basis of current basic pay of Government employees and the dearness relief is calculated on the basis of basic pension of Government pensioners. DA/DR is normally declared twice a year for compensating the price hike of essential commodities. DA/DR is indicating a particular percentage fixed by the Central Government. The calculation of DA/DR is based on CPI (IW) as per the recommendations of the 7th pay commission.

DA Rate Table: Dearness Allowance Rates from 2016 to till date as per 7th pay commission for Central Govt employees.

How to calculate DA?

Dearness allowance (DA) is calculated on the percentage fixed by the Central Government from time to time as per the calculation method prescribed by the pay commission. The percentage of basic pay is Dearness Allowance.

Dearness Allowance Rates from Jan 2016 to July 2016 and Jan 2017 to till date for Central Govt employees.

Note: Central Government had taken the decision on merger of dearness allowance with effect from 1.4.2004 in 5th CPC period. But, the calculation of DA continued with reference to the CPI (IW) average as on 1.1.1996 of 306.33. After merged DA with Basic pay, from July 2004 to July 2007 the above said calculation was adopted.

What is current rate of Dearness allowance?

The current rate of Dearness allowance is 17% with effect from 1st July 2019 for Central Government employees, Pensioners and Family Pensioners in India.

The Dearness Allowance is increased from 295% to 312% effective from July 2017 for Central Govt Employees and Central Autonomous Bodies to draw their pay in the pre-revised pay scale as per 5th pay commission. Click to download pdf order.

The DA rate enhanced from 154% to 164% from 1.7.2019 to Central Govt Employees and Central Autonomous Bodies continuing to draw their pay in the pre-revised pay scale and Grade pay as per 6th pay commission. Click to download and view the order as pdf.

An additional 5% DA granted to all groups of Central Govt employees with effect from 1st July 2019. The DA is increased from the existing rate of 12% to 17%. To view order in pdf click here.

DA for Bank Employees and Officers