7th Pay Commission Pension Calculator in the simple form of a software tool, not in the excel format for Armed Forces Defence Personnel. 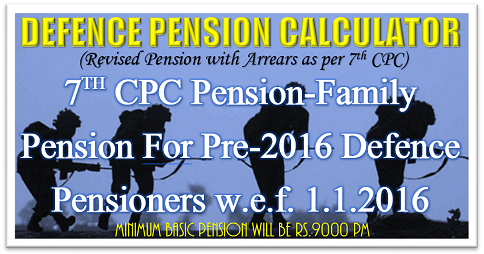 DESW issued orders on 29th October 2016 regarding the revision of pension and family pension for  Defence Forces with effect from 1.1.2016 with some illustrations. We have presented here a simple online tool to calculate your revised pension as per your inputs…

For existing pensioners, who have retired/died before 01.01.2016, the revised pension-family pension with effect from 01.01.2016 shall be determined by multiplying the Basic Pension (before commutation)-Basic Family Pension (exclusive of Dearness Relief) as had been drawn as on 31.12.2015 by 2.57 to arrive at revised pension under 7th CPC. The amount of revised pension/family pension so arrived at shall be rounded off to next higher rupee.

The minimum basic pension with effect from 01.01.2016 will be Rs. 9000/- per month (excluding the element of additional pension admissible to old pensioners). The upper ceiling of pension-family pension will be 50% and 30% respectively of the highest pay in the Government (The highest pay in the Government is Rs. 2,50,000/- with effect from 01.01.2016).

The existing Pension-Family Pension will be the Basic Pension(before commutation)-Basic Family Pension only without the element of Additional Pension (referred to at Para 12) available to the old pensioners-family pensioners of the age of 80 years and above. The Additional Pension-Family Pension payable to the old pensioners-family pensioners will be worked out accordance with the table given in the order. Since the revised pension will be inclusive of commuted portion of pension, if any, the commuted portion will be deducted from the said amount while making monthly disbursements.

The revision of pension-family pension of Defence pensioners arrived in the above manner shall be subject to the findings and recommendation of the committee set up with the approval of the Cabinet to examine the feasibility of increment based formulation recommendation of 7th CPC for revision of pension and decision of the Government thereon if any.