You are here: Home / 7th Pay Commission Pay Scale for Defence Personnel as per Pay Matrix for Level 3, 4 and 5

7th Pay Commission Pay Scale for Defence Personnel as per Pay Matrix for Level 3, 4 and 5 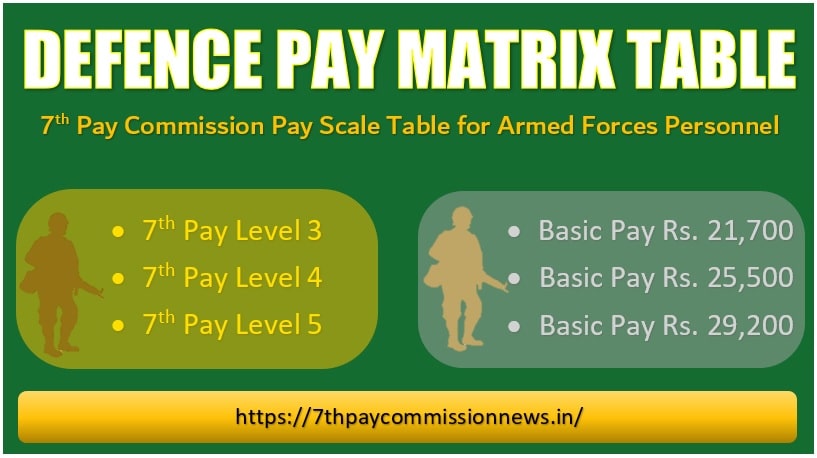 The first and starting pay scale for Defence Armed Forces Personnel in India is Level 3 in 7th Pay Commission. The initial basic pay salary is Rs. 21,700 from 1.1.2016. The first group of three pay level from 3 to 5 are given below for your information.

New Pay Structure for Defence Personnel with effect from 1.1.2016 as follows

What is Defence pay matrix level 3?

The first and starting pay scale structure for Armed Forces Personnel after 7th pay commission. The minimum basic salary of pay level 3 is Rs. 21700 and the maximum of Rs. 69100 with 40 annual increment stages.

What is Defence pay level 4?

What is Army pay scale level 5?

The last pay scale structure in pay band 1 for army personnel after implementation of 7th pay commission. The starting basic salary of pay matrix level is Rs. 29200 and the maximum basic salary is Rs. 92300.