You are here: Home / 7th CPC Increment / Grant of annual increment due on 1st July to the employees retiring on 30th June of the year 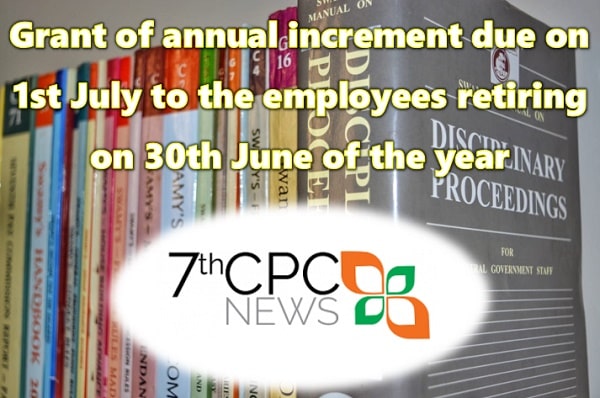 Sub: Grant of annual increment due on 1st July to the employees retiring on 30th June of the year

A number of representations are being received in this office seeking grant of one notional increment as due on 1st July in favour of employee retiring on 30th June before drawing the same, exclusively for the purpose of pensionary benefits.

2. As the Railways are aware, the annual increment is granted to railway employees on completion of laid down qualifying service for the purpose. Based on the recommendations of the Sixth Central Pay Commission, as accepted by the Government of India, Railway Services (Revised Pay) Rules, 2008 were notified on the lines of Central Civil Services (Revised Pay) Rules, 2008. As per Rule 10 of above Rules, it was stipulated that there will be a uniform date of annual increment, viz. 1st July of every year and the employees completing 6 months and above in the revised pay structure as on 1 of July will be eligible to be granted the increment. There has been no change in the above rule / extant policy so as to enable grant of increment (notional or actual) on 30th June, where it was due on the following 1st July.

3. In the various representations being received in this office, certain Judgements in the case of Shri Ayyamperumal, an employee of Department of Revenue are being cited. As the details of above court matter and policy decision of concerned nodal departments were not available in this office, the matter was referred to concerned departments of Government of India seeking their advice/guidelines.

4. DOP&T vide their O.M dated 11.11.2019 have stated that the Judgement passed in the case of Shri P. Ayyamperumal is in personam. Further, the judgement pronounced by Hon’ble High Court of Madras in P. Ayyamperumal case, as endorsed by Hon’ble Supreme Court, is based on the decision in the case of M. Balasubramaniam, which was related to Fundamental Rules of State Govt. However, Central Government employees are governed by Central Government Rules. Further, Hon’ble High Court of Andhra Pradesh at Hyderabad in C. Subbarao case has inter-alia observed that “A person who retires on the last working day would not be entitled for any increment falling due on the next day and payable next day thereafter, because he would not answer the tests in these Rules.” A copy of DOP&T O.M dated 11.11.2019 is enclosed herewith.

5. The Railways are therefore advised to take further necessary action to dispose of the pending representations on the issue based on above position and advice of DOP&T. The pending court cases may also be defended accordingly. Further, in case any clarification/inputs are required relating to railway Fundamental Rules and Railway Pension Rules, Finance (Estt.) dte. may also please be consulted being the nodal directorate on these aspects. This issues with the approval of DG/HR, Railway Board.

Copy to: EDF(E)/Railway Board for information.

Top Developments on Increment issue to the retirees on 30th June: