You are here: Home / 7th CPC Increment / One Notional Increment to those retired on 30 June after completion of 365 days

Bharat Pensioners’ Samaj writes a letter to the Finance Ministry and Law Ministry on 16th January 2020 about the issue of granting one notional increment to those retired on 30th June after completion of 365 days. The content of the letter is reproduced and given below for your information: 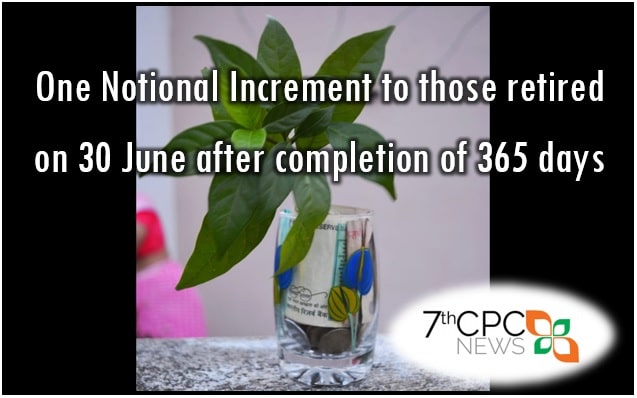 Also check: Grant of Notional Increment on completion of 12 Months of Service

Subject : One notional increment to those retired on 30th June after completion of 365 days

“Article 14 of the Constitution ensures equality among equals: its aim is to protect persons similarly placed against discriminatory treatment. (State of U.P. [(1969) 1 SCC 817])) Pensioners form a homogenous group (D.S. Nakara & Others vs Union of India on 17 December, 1982) Equivalent citations: 1983 AIR 130, 1983 SCR (2) 165 wherein it was HELD: Article 14 strikes at arbitrariness in State action and ensures fairness and equality of treatment. Principle underlying the guarantee is that all persons similarly circumstanced shall be treated alike both in privileges conferred and liabilities imposed. Equal laws would have to be applied to all in the same situation and there should be no discrimination between one person and another.

The judgments under reference may be in Persona, REM or Supra. The fact remains that the honorable courts decided an issue relating to pensionary benefit and that UOI was one of the party to the case as such to ensure equality under Article 14 of constitution it need to be applied to all similarly placed and not only to appellant.

Honorable PM (in his speech in Golden Jubilee celebration of Delhi High court) as well as Honourable Supreme Court through pronouncements in several of its judgements has said that the issue once decided should apply to all similarly placed. MOD through its circulars CGDA, Ulan Batar ‘Road, Palam-Delhi Cantt No. AN/III/ 3012/Circular/Vol. VII Dated 30.10.18 and GOI Ministry of Defense D(CMU), Sena Bhawan, New Delhi, Dated 07.09.2018 has provided application of Court judgments to all similarly placed.

Bharat Pensioners Samaj once again request you not to push pensioners who are in the evening of their lives to courts to seek redress on issues already decided. Please have MERCY on them.

Top Developments on Increment issue to the retirees on 30th June: