Stop and recovery of payment on allowances not mentioned in 7th Pay Commission Report – Railway Board Order dated 25.6.2020

The Railway Board has instructed to stop and recovery of payment of allowance not mentioned in the 7th Central Pay Commission Report or Finance Ministry Resolution issued on 6th July 2017 with effect from 1.7.2017 or date of such payment being made to the Railway employees. The order is reproduced and given below for your information: 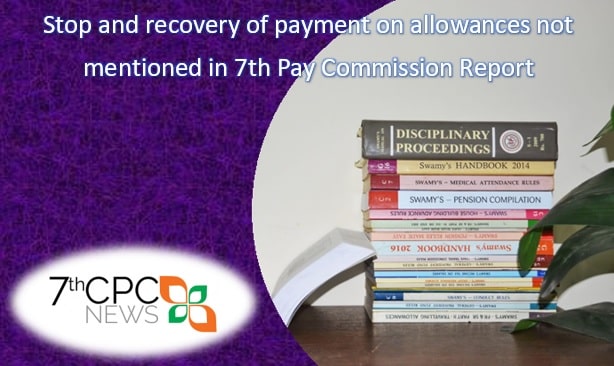 The recommendations of 7th CPC on allowances were accepted by Government with 34 modifications as per Ministry of Finance’s Resolution No.11-1/2016-IC dated 06.07.2017 which was also adopted by Ministry of Railways and orders regarding various allowances admissible to Indian Railway personnel were issued by Railway Board.

2. In this regard, an Office Memorandum had been issued by Ministry of Finance in accordance with Para 8.2.5 of the Report of the 7th CPC wherein it was mentioned that any-allowance not mentioned in the Report (and hence not reported to the Commission), shall cease to exist immediately. This order shall apply mutatis mutandis in Ministry of Railways also.

3. In this regard, it is advised that payment of any allowance not mentioned in 7th Central Pay Commission’s Report or Ministry of Finance’s Resolution dated 06.07.2017 shall be stopped with immediate effect and any payment that has been made inadvertently, recovery may also be made w.e.f. 01.07.2017/ date of such payment being made. Further, if any such allowance is required to be restored, a detailed self contained proposal, containing suitable functional justification along with expected financial implications may be forwarded to the concerned Directorate in Railway Board after the same being concurred by Associate Finance of the concerned Railway and approval of Competent Authority for further processing in consultation with Ministry of Finance as mandated in their resolution dated 06.07.2017.

4. This issues with the concurrence of Finance Directorate and approval of competent authority of Ministry of Railways.