Ahead of Diwali and other festivals, the Central Govt is likely to release the additional 3 per cent DA and DR to Central Government employees and pensioners as early as possible!

Latest DA News Today 2021 for Pensioners: Again 3% of Dearness Relief may be hiked in pension from 1st July 2021 for central government pensioners! As per the DA and DR calculation, the announcement of a second additional instalment of Dearness Allowance for the year 2021 is pending! The 2nd instalment of DA from July 2021 may be hiked by 3% and the arrears may be paid soon!

Check here the current monthly pension with a simple online tool after the 7th pay commission: The Central Government has recently declared a hike in DA from 17% to 28% with effect from 1st July 2021. The bank pension for the month of July 2021 is increased by 11% of the basic pension. Check with the online pension tool.

[Note: The result values are approximate only] 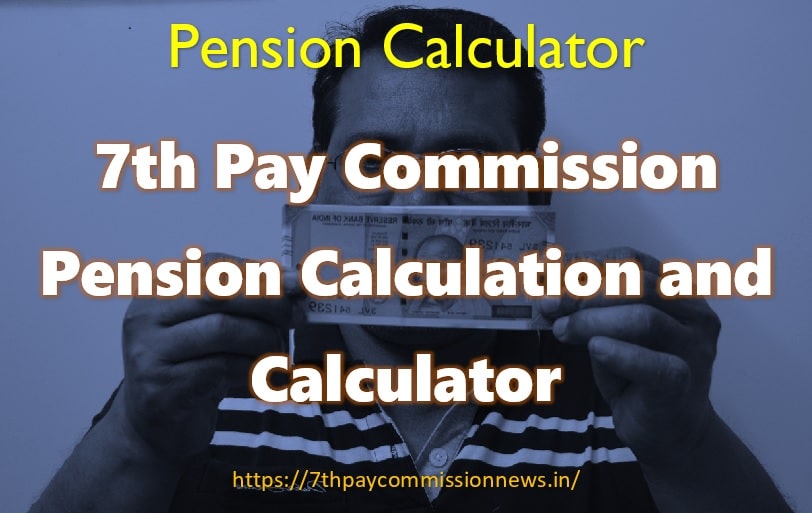 7th CPC recommended fixing the revised pension from 1.1.2016 for all pensioners and family pensioners in two methods.

The concept of minimum pension and the method of computing it has not been explained by any of the pay commissions or the Government, it is clear that the Minimum Pension is 50% of the Minimum Wage.

The rationale behind the percentage has nowhere been explained. We however think that in order to ensure that it is adequate, 100% of the minimum wage should be the Minimum Pension.

The very concept of Need-Based Minimum Wage is that this is a level of wage below which a worker’s family cannot subsist/survive and remain capable to perform.

That being the concept of the minimum wage, it should also apply in the case of Minimum Pension on the premise that any pension lower than the Minimum pay is insufficient to enable a pensioner/family pensioner to live or survive. The 7th Pay Commission has recommended the fixation of pension for civil employees including CAPF personnel, who have retired before 01.01.2016, given two formulations with illustrations for fixing of pension. One for the pensioners retired before 2016 and another one is for the pensioners retired before 2006.

And also recommended, the first formulation of fixing the pension may take a little time since the records of each pensioner will have to be checked to ascertain the number of increments earned in the retiring level. In the first instance, the revised pension may be calculated as in the second formulation and the same may be paid as an interim measure. In the event calculation as per the formulation of fixing the pension yields a higher amount, the difference may be paid subsequently.

And one more important recommendation of the option given to the pensioners for choosing whichever is beneficial to them.

Recommendations on fixing of Pension by 7th CPC

All the civilian personnel including CAPF who retired prior to 01.01.2016 (expected date of implementation of the Seventh CPC recommendations) shall first be fixed in the Pay Matrix being recommended by this Commission, on the basis of the Pay Band and Grade Pay at which they retired, at the minimum of the corresponding level in the matrix.

1. This amount shall be raised, to arrive at the notional pay of the retiree, by adding the number of increments he/she had earned in that level while in service, at the rate of three percent. Fifty percent of the total amount so arrived at shall be the revised pension.

2. The second calculation to be carried out is as follows. The pension, as had been fixed at the time of implementation of the VI CPC recommendations, shall be multiplied by 2.57 to arrive at an alternate value for the revised pension.

The pension and family pension calculation methodology recommended in the 7th pay commission for the pensioners who are retired under Old Pension Scheme.

Calculation Methodology as per 7th CPC

The 7th Central Pay Commission has recommended two options for calculating revised pension for Civil Pensioners who retired before 1.1.2016.

The first option is the revised pension will be fixed in the Pay Matrix on the basis of 6th CPC pay. To arrive notional pay, the amount of minimum of his corresponding level and adding the number of increments earned in service. And then pension and family pension will be calculated.

The second option is basic pension (Fixed at the time of 6th CPC) multiply with 2.57 fitment factor to arrive at an alternative value for the revised pension.

One of the biggest and familiar federation which is established in 1955, Bharat Pensioners Samaj (BPS) submitted a memorandum to the 7th Pay Commission related to pensioners issue.

What is the minimum pension as per the revised pension table?