The 7th Pay Commission clearly indicates to stop the overtime allowance to Central Government employees except for industrial employees.

JCM-Staff Side has demanded that OTA should be paid to all government employees who are asked to work beyond office hours, on the basis of actual Pay, DA and Transport Allowance.

Analysis and Recommendations : Out of the total expenditure on OTA in Government of India in 2012-2013, over 90 percent is on account of just two ministries: MoR – Ministry of Railways and MoD – Ministry of Defence (Civilian employees). The Commission compared the OTA expenditure in these two ministries over the period 2006-07 to 2012-13 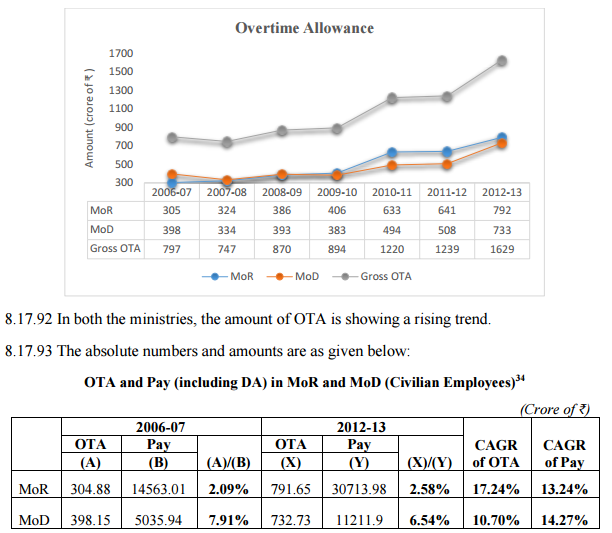 This clearly shows that while MoD has achieved some success in its efforts to control OTA, the efforts of MoR have not yielded the desired results. However, at the same time, it should also be kept in mind that OTA as a percentage of pay is already much higher in MoD compared to MoR.

The Commission also took note of the recommendations of the III, IV, V and VI CPCs that OTA should be abolished except where it is a statutory requirement. However, it is also a fact that despite these recommendations, OTA continues to be paid to certain categories of staff (at rates that are quite old) even when it is not a statutory requirement.

Hence, while this Commission shares the sentiments of its predecessors that government offices need to increase productivity and efficiency, and recommends that OTA should be abolished (except for operational staff and industrial employees who are governed by statutory provisions), at the same time it is also recommended that in case the government decides to continue with OTA for those categories of staff for which it is not a statutory requirement, then the rates of OTA for such staff should be increased by 50 percent from their current levels.

A stricter control on OTA expenditure is also suggested.