“Today in Parliament, Minister of State for Finance Shri Santhosh Kumar Gangwar said in a written reply to a question regarding the submission of Allowance Committee Report.

He said that the Allowance Committee is now in the process of finalizing its Report. Decisions on implementing the Report will be taken after the Report is submitted by the Committee.”

QUESTION:
(a) Whether Government has formed a Committee for taking decision about the allowances to the Central Government employees and removal of anomalies in their pay scales announced by the Seventh Pay Commission;

(b) if so, whether the Committee has submitted its report;

(c) if so, the main features thereof and if not, the reasons for delay in submission of report; and

(d) the time by which recommendations of Seventh Pay Commission regarding the allowances are proposed to be implemented?

ANSWER:
(a) to (d): The Committee on allowances has been constituted vide order dated 22.07.2016 to examine and make recommendations as to whether any changes in the recommendations of the 7th CPC relating to allowances are warranted and if so, in what form.

A separate anomaly committee at National Level has also been set up, vide O.M. dated 09.09.2016, to settle the anomalies arising out of the implementation of the 7th CPC recommendations.

The National Anomaly Committee has made recommendations on the calculation methodology of the Disability Pension for Defence forces personnel. The Committee on allowances has received a large number of demands on allowances and even now receiving such demands. All the demands have been diligently examined.

The Committee has already held 13 meeting so far and interacted with the representatives of Central Nodal Ministries, National Council (Staff Side), Joint Consultative Machinery (JCM) and officers and representatives of employee associations of Ministry of Health and Family Welfare, Home Affairs, Railways, Defence and Department of Posts.

The Committee is now in the process of finalizing its Report. Decisions on implementing the Report will be taken after the Report is submitted by the Committee.

Allowance Committee not yet submitted its report to Govt – Minister replied in Parliament on 10.3.2017 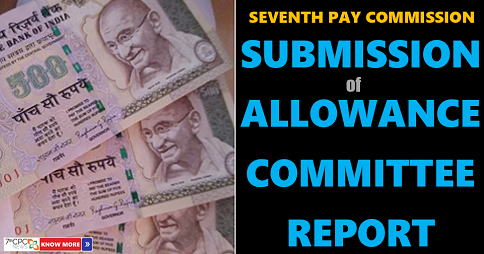