Reversion to old pension scheme for personnel of Ministries

(a) whether a decision has been taken for hundreds of paramilitary forces whose recruitment process commenced/done before 2004 but joined in 2004 or after due to administrative delays, to revert to the old pension scheme as per a Delhi HC order and if so, the details thereof;
(b) whether the Ministry, on similar lines of CAPFs, would identify such personnel in all the Ministries and extend the benefit of old pension scheme; and
(c) if so, the details thereof and if not, the reasons therefor?

(a) to (c): In accordance with the scheme for National Pension System (NPS), as notified vide Ministry of Finance (Department of Economic Affairs)’s Notification No. 5/7/2003-ECB & PR dated 22.12.2003, the System is mandatory for all new recruits to the Central Government service (except armed forces) from 01.01.2004. Accordingly, as per Rule 2 of the Central Civil Services (Pension) Rules, 1972, as amended on 30.12.2003, these rules are applicable to Government servants appointed to civil posts on or before 31.12.2003. The year of commencement/completion of the recruitment process is not relevant for deciding the applicability of the Central Civil Services (Pension) Rules, 1972.

In the specific cases relating to appointments as Sub-Inspector in various Central Para Military Forces after selection in August, 2003 on the basis of an Examination conducted in 2002, appointments were made in Central Reserve Police Force in 2003 and the candidates appointed were covered by the pension scheme under Central Civil Service (Pension) Rules, 1972. However, in the Border Security Force, offers of appointment on the basis of the same examination/selection were issued in January, 2004. On a petition filed by some personnel appointed in the Border Security Force on the basis of that examination, Hon’ble High Court of Delhi directed to cover the petitioners under the Central Civil Service (Pension) Rules, 1972 on the grounds of administrative delay on the part of Border Security Force in making appointments. The order of Hon’ble High Court of Delhi was implemented by the Ministry of Home Affairs/Border Security Force in view of the peculiar circumstances of that case and the administrative delay in making appointments in that case. The decision taken in the aforesaid case is not relevant for deciding applicability of Central Civil Service (Pension) Rules in other cases where recruitment process was commenced or completed before 01.01.2004. 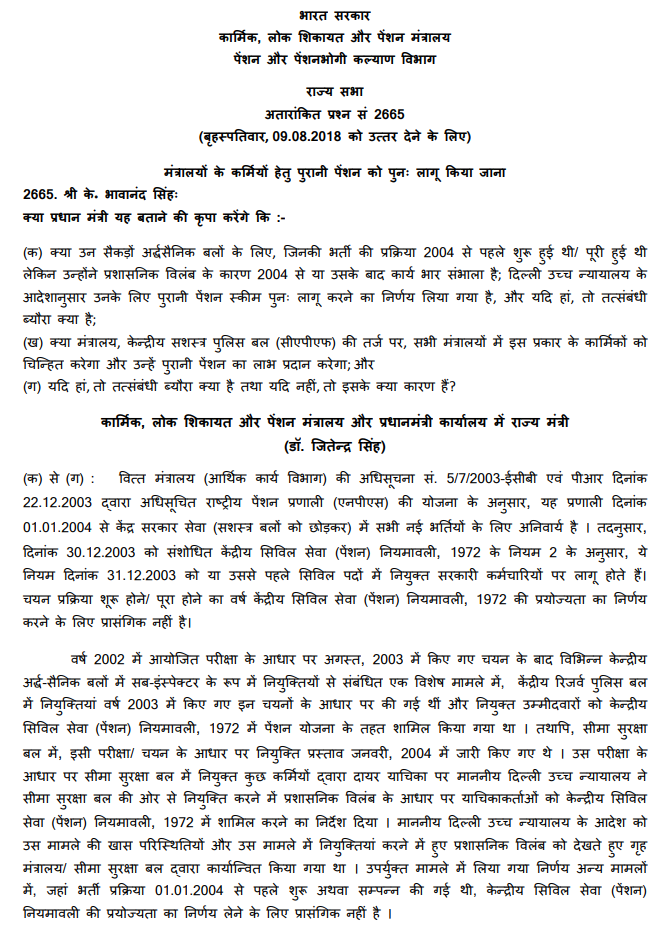