“After the centre’s announcement of implementation, all ex-servicemen are curious to know about their likely increments and arrear in pension revision.”

Despite the fact that the Central Government has announced the implementation of OROP, which has been the long-standing demand of ex-servicemen for more than 40 years now, anti-government protests and rallies continue to rock New Delhi.

The ex-servicemen have made clear their disappointment over certain important demands and expectations related to the OROP, including the amendments in the pension revision, date of implementation, constituting a one-man commission, fixing of the base year, and the case of those who chose to retire early. These are also the reasons why protests have resumed.

According to the Ex-servicemen statement, 46% of ex-servicemen are PMRs(Pre Mature Retirement). So, this is the very important aspect in this scheme and we cannot compromise, veterans said.

The relay fast that was started at New Delhi’s Jantar Mantar in order to demand the immediate implementation of OROP, continues even after 83 days. Finally some of the war veterans launched a fast-unto-death protest. These protests, that were carried out in order to get the government to take some concrete action, instead of just making promises, succeeded. But, instead of celebrating the success of their protests, the ex-servicemen forced to declare that their protests will continue.

On the other hand, however, the Central Government has also splashed pictures of ex-servicemen delegates greeting the Prime Minister with bouquets, congratulating him for implementing the OROP scheme. But, there is no denying the fact that the announcement has brought cheers to all the ex-servicemen in the country.

Meanwhile, the big question among ex-servicemen now is – how much will the actual increment be? What is the arrears amount? When will it be delivered?

Understanding the OROP scheme is getting more and more complicated with new demands and clarifications being raised with each passing day. Only by debating and discussing on these issues can they be understood clearly. It is difficult to predict the increments and arrears of each and every pensioner accurately. There is no fixed age of retirement for all. The arrears and increments have to be calculated on the basis of their ranks, the number of years that they had served, and the year of their retirement.

It would be easier to calculate this if the Government releases a detailed PROJECTED OROP TABLE of revision of pension for all categories.

But, everyone, justify from the Jawans, up to senior officers, is assured of enhancement of approximately Rs.2200 to Rs.22,000 pm.

Armed Forces Veterans welcomed and greeted Prime Minister, Shri Narendra Modi for yesterday’s announcement of OROP during the inauguration function of the Badarpur-Faridabad Metro Line at Faridabad today. They presented flowers to the Prime Minister and thanked him. 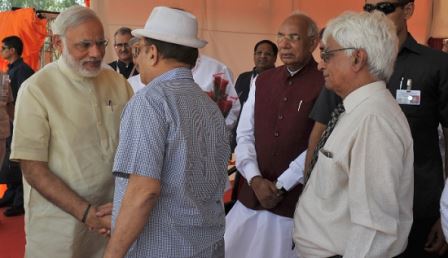 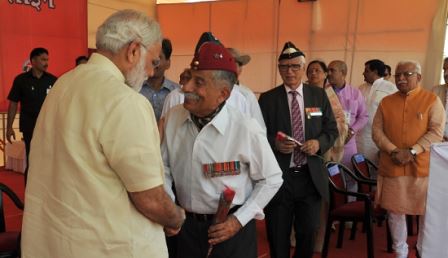