You are here: Home / 7th Pay Commission Allowance in Lieu of Kilometrage (ALK)

Allowance in Lieu of Kilometreage (ALK) 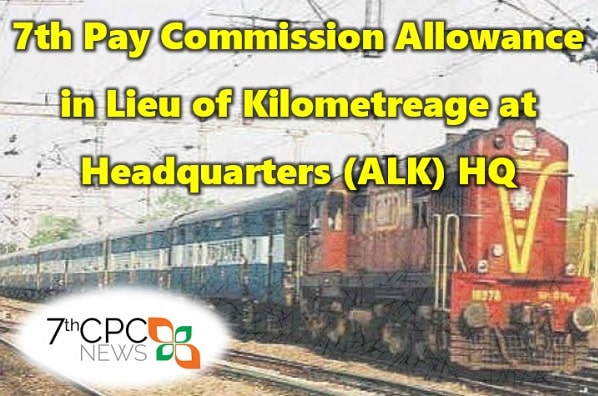 This allowance is granted to running staff of Indian Railways when they are engaged in or employed on non-running duties. The present rates are:

The activities for which ALK is payable are given below:

Allowances Not Included In the Report

“Both the recognised federations of Indian Railways, viz., All India Railwaymen’s Federation (AIRF) and National Federation of Indian Railwaymen (NFIR) have requested that “the issue pertaining to payment of Running Allowance (Kilometerage Allowances and ALK) is best left to the Railway Administration, since from time immemorial, the kilometerage entitlements/rates are decided through bi-lateral discussions between Railway Board and Federations.” On the other hand the Ministry of Railway specifically referred the examination of Running Allowance (RA) to the
Seventh CPC for its consideration, vide Letter No.E(P&A)II-2014/Misc.3/7th CPC of 20.10.2014.

However, subsequently vide letter No.E(P&A)II-2014/Misc.3/7th CPC of 11.05.2015, the Ministry of Railways reverted to the Commission stating that successive Pay Commissions have “refrained from giving any express recommendations on the methodology/formula for calculation of the rates of Kilometreage Allowance/ALK,” and “7th CPC may consider to let past practice continue.” Considering the above, except for the Special Running Staff Allowance, which is covered in the Chapter 11.40, the discussion on these allowances is not included in the report.”

Accordingly, the 7th CPC has not included the following 12 allowances in the Report:

The Indian Railway Loco Runningmen Organization (IRLRO) requested that the Committee should examine the rates of Running Allowance instead of Ministry of Railways.

The Committee is of the view that as per recommendations of the 7 th CPC, the rates of above mentioned 12 allowances may be decided through bilateral discussions between Railway Board and Federations as earlier. The rates may, thereafter, be notified by the Ministry of Railways with the concurrence of the Ministry of Finance.