The Chairman,
Railway Board,
New Delhi

Sub: Payment of ALK(HQ) to Running Staff during lockdown period

Kindly recall our earlier letter of even number dated 15th April, 2020 on the above cited subject matter.

Keeping in view the threat of the Coronavirus outbreak in the country, the Government of India had enforced countrywide lockdown w.e.f. 24/25 March, 2020, whereupon all the Coaching Trains were cancelled and only Goods Trains and some Parcel Trains were allowed to operate during the lockdown period. Subsequently, some “Shramik Special Trains”, to transport the Migrant Workers, and 15 “Special Trains”, from New Delhi, also started operating. However, majority of the Running Staff in the higher grades, i.e. Passenger, Mail, Express Grades, are headquartered without without calling them for duty due to cancellation of large-number of Coaching Trains.

It has been reported by number of our affiliated unions that, salary of the Running Staff, who are not called for duty, is being charged without computing Pay Element of ALK. In this connection, attention is invited towards Railway Boare’s letter No.E(P&A)II-80/RS-10 dated 17.7.1981, which stipulates that, Running Staff are eligible for Allowance in lieu of Kilometreage(ALK) at Headquarters, i.e. 30% of the Basic Pay(as provided in Sub-para of 3.5), when Running Staff cannot be allowed running or other duties on account of Natural Calamities, like breaches due to floods or coal shortage, which is in conformity with Paras 927 and 907(a) of the IREM.

You may appreciate that, Running Staff are not being booked for running or other duties due to cancellation of large-number of Coaching Trains owing to countrywide lockdown in the wake of COVID-19 outbreak, which is beyond their control. As such, it is requested that, necessary instructions be communicated to all the Zonal Railway Administrations to permit payment of ALK to Running Staff as per provisions contained in the aforementioned paras of the IREM.

An early action in the matter shall be highly appreciated. 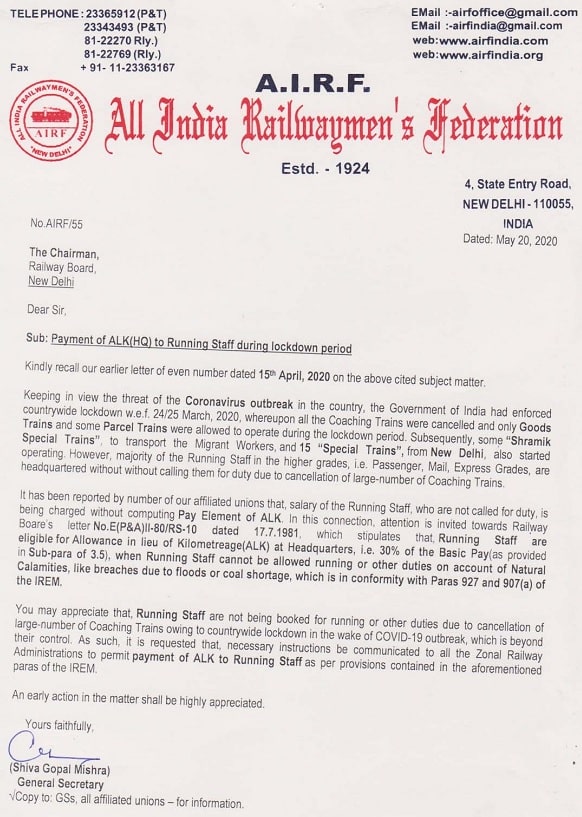 Payment of Full Stipend to Apprentices During Lockdown National Lockdown Period extended till 17th May 2020 Exemption from Duty in Lockdown Period for Central Govt Employees – Dopt Payment of Wages to Contractual, Casual and Outsourced Staff during lockdown period due to COVID-19 Payment of salary to employees during the lockdown period can be adjusted against the CSR expenditure? Payment of Wages to Outsourced Persons of Government of India during lockdown period due to COVID-19 Reckoning of 30% pay element for the purpose of payment towards leave encashment upto 10 days to running staff 2% DA on Basic Pay plus Running Allowance from 1.7.2016 to Running Staff Fixation of Pay in the Revised Pay Structure to Running Staff