No.21/5/2017-E.II (B)
Government of India
Ministry of Finance
Department of Expenditure

Subject: Implementation of the recommendations of the 7th Central Pay Commission relating to grant of Transport Allowance to Central Government employees.

Consequent upon the decision taken by the Government on the recommendations of the seventh Central Pay Commission , the President, is pleased to decide that Transport Allowance shall be admissible to Central Government employees at the following rates:-

2. The grant of Transport Allowance shall be subject to the following conditions:-

(i) The allowance shall not be admissible to those employees who have been provided with the facility of Government transport.

(ii) In respect of those employees who opt to continue in their pre-revised Pay-structure/ Pay Scales , the corresponding Level in the pay Matrix of the post occupied on 01.01.2016 as indicated in CCS (Revised Pay) Rules, 2016 would determine the allowance under these orders.

(iii) Physically disabled employees as mentioned in DoE O.M.No 19029/1/78-E.IV (B) dated 31.08.1978 and subsequent orders in respected of the categories viz. visually impaired, orthopedically handicapped, deaf and dumb/hearing impaired, spinal deformity, shall continue to be paid Transport Allowance at double the normal rates, subject to fulfilment of the stipulated conditions, which shall, in no case, be less than Rs.2250/- p.m. plus applicable rates of Dearness Allowance.

(iv) Officers drawing pay in Levels 14 and above in the Pay Matrix, who are entitled to the use of official car in terms of Department of Expenditure’s O.M.No .20(5) -E.II (A)/93 dated 28.01.1994, shall be given the option to avail the official car facility or to draw Transport Allowance at the rates of Rs.15, 750/- p.m. plus Dearness Allowance thereon.

Before , allowing Transport Allowance @ Rs.15750/- plus D.A thereon, the option exercised by an officer will be examined by the administrative Ministry and his/her entitlement to the use of official car in terms of the O.M. dated 28.01.1994 ibid will require to be certified by the competent authority.

In case, an officer opts to draw Transport Allowance @ Rs.15750/- p.m. plus D.A. Theron, he /she will not be allowed to change his/her option during the remaining period of his/her current assignment.

3. Admissibility of Transport Allowance during the following Circumstances:-

(a) During Leave: The allowance will not be admissible for the calendar month(s) wholly covered by leave.

(d) During training treated as duty: The allowance may be granted during such training, if no Transport Facility/ Traveling Allowance /Daily Allowance is provided for attending the training institute. During Official tour in him training course, the allowance will not be admissible when the period of the tour covers the whole calendar month.

Also, during training abroad, no Transport will be admissible when the period of such training covers the whole calendar month.

(e) During inspections /survey duty by Members of Special Parties within the city but exceeding 8 kms. From the Headquarters or during continuous field duty either in or outside the Headquarters:

Transport Allowance is given to compensate for the expenditure incurred for commuting for both to and fro between the place of duty and residence. In case when one gets Road Mileage/Daily Allowance or free transportation for field/inspections /survey duty or tour for a period covering the whole calendar month, he/she will not be entitled to Transport Allowance during that calendar month.

(f) To vacation staff: Vacation staff is entitled to Transport Allowance provided no free transport facility is given to such staff. However, the allowance shall not be admissible when such vacation spell, including all kinds of Leave, cover the whole calendar month(s).

(g) During Suspension: As a Government employee under suspension is not required to attend office, he/she is not entitled to Transport Allowance during suspension where suspension covers full calendar month(s).

In respect of the armed forces Personnel and Railway employees, separate orders will be issued by the Ministry of Defence and Ministry of Railways, respectively.

6. In so far as the persons serving in the Indian Audit and Accounts Department are concerned, these orders issue in consultation with the Comptroller & Auditor General of India. 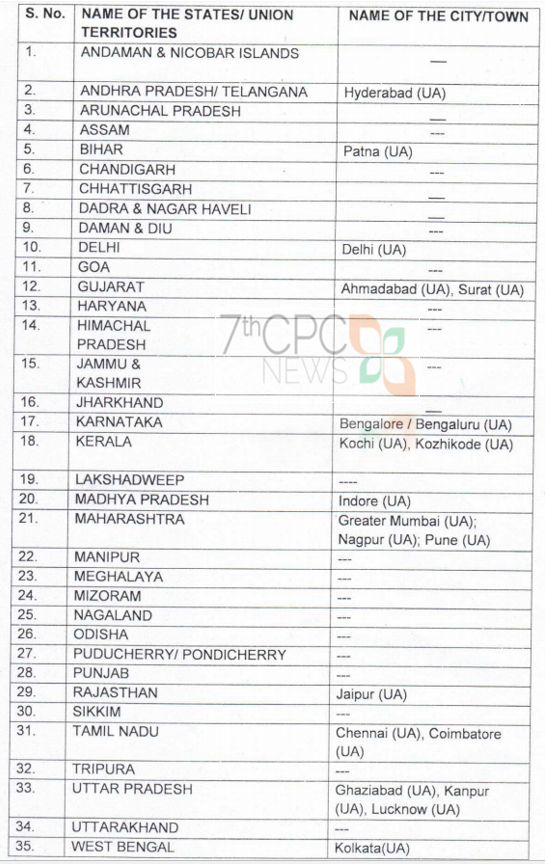 List of Cities / Towns Eligible for Higher Rates of Transport Allowance on Re-Classification of Cities/Towns as per Census-2011 (w.e.f.1.4.2015)