Some inside information about revised wage of officers.It is learnt from various sources that details of wage revision has already been finalized and the bipartite agreement may be inked on 22nd May 2015.

We have been able to gather some information about the revised wage of bank officers. Though we do not have any particular details about workmen but it can be assumed that it will be in the same line as of the bank officers.

It is learnt that the new Basic Pay will be approximately 1.66 times the present basic pay. The revised Basic Pay is expected be from Rs.24,000 (Officer in JMGS I at the first stage of the scale) to Rs.86,400.

Number of Stagnation increments may also be increased.

It is understood that a new Grade Pay will be introduced. It will be at 7% of the revised Basic Pay for officers up to MMGS III, at 11% for officers in SMGS IV and SMGS V and at 12% for TEGS VI and TEGS VII.

While this Grade Pay may attract D.A., it may not be reckoned for computing HRA, CCA, PF, Pension and Gratuity. It will also affect our future pay scales whenever any revision is made. However, there is no final word on this point.

HRA is expected to be at 8%, 9% and 10% respectively, depending on the population group.

FPP is expected to be at last increment drawn plus D.A. at 60.15% thereon. For people drawing HRA, HRA amount may also be included in FPP. It is yet to be made clear. 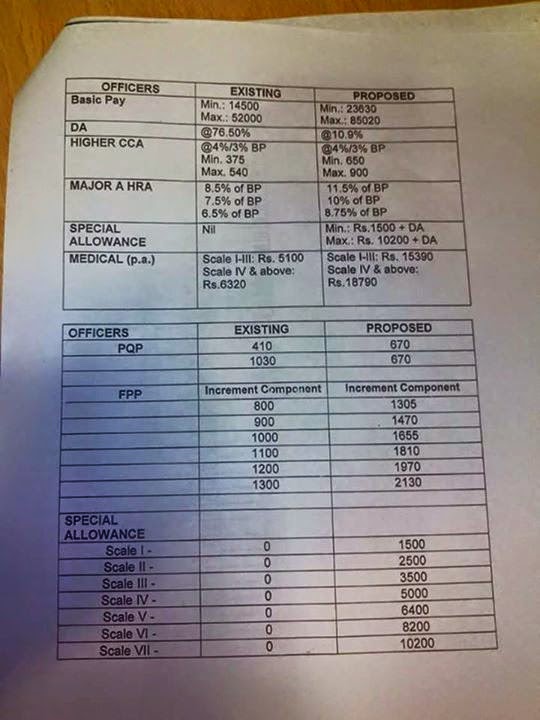