You are here: Home / Retirement / The Motive behind Reducing Retirement Age for Central Government Employees – An Analysis 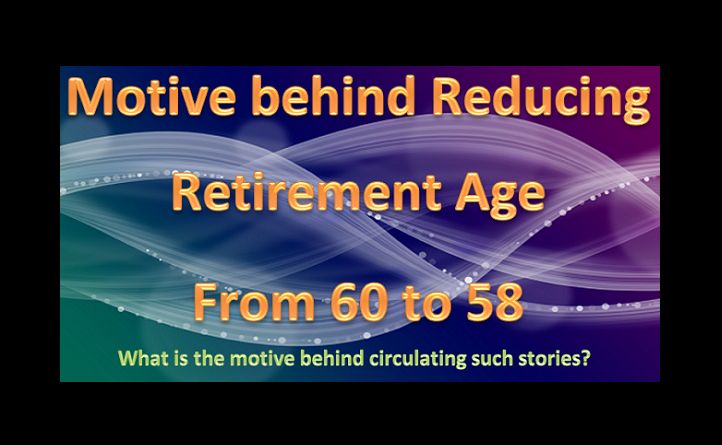 For a few weeks now, reports have been surfacing that the Centre is giving serious thoughts about reducing retirement age of Central Government employees from 60 to 58.

The truth behind these series of rumours couldn’t be found yet. There is no official stand on this either.

The news was first published by popular English daily newspaper. Without any official source to confirm it, the article analyzed the issue from various perspectives. It was presented in a manner that was acceptable by most.

This was followed by an order of the Railway department that was released on Facebook. In the order, the Railway Board had demanded an explanation from their zonal railways over the number of retiring employees (safety category) if the age of the retirement is reduced to 58.

Another event that gave credibility to the issue was the reduction of retirement age of state government employees from 60 to 58 in Haryana, a state ruled by BJP.

There are many who are for and against the news, the strongest opinion in favour of age reduction being that it would help ease the unemployment problem.

Those who are looking for their first jobs would be happy to support any kind of age reduction – be it 58 or even 50! This is simply because they are desperate to get into a job. But the truth is – the attitude will definitely change once they get a job.

Moreover, it is also true that handing out retirement benefits to 5 lakh employees at a time is going to drain the Government’s financial resources.

Another important reason to support the reduction of retirement age is the claim that it would bring younger blood into the various central government organizations.

Another argument in support of this move claims that it is the Government’s attempt to cut down unplanned expenses.

In the past few years, the Government had implemented a number of cost-cutting measures. It is not clear why the Government, that had remained blind to this fact, has suddenly seen the light. Ironically, such a move would only worsen the economic crisis.

Finally, what is the motive behind circulating such stories?
Is it to simply wipe out talks about increasing the retirement age from 60 to 62?

One has to wait and watch.

There is a hope that Modi Government wouldn’t risk weakening the Central Government offices’ functioning by sending home 5 lakh experienced and trained personnel all of a sudden.

And, let us hope that the Government recognizes the importance and value of 30 years of work experience of each of these employees before discarding them.