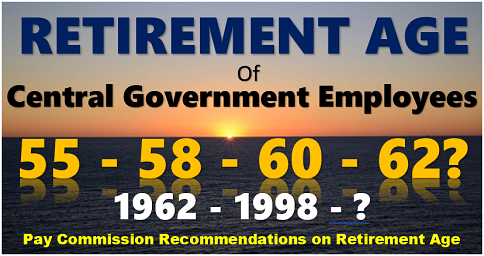 “Retirement age for Central Government employees is 60 years now. It was raised to 60 from 58 in 1998(Dopt order), when the then NDA Government led by Atal Bihari Vajpayee”

Last year, there were rumours that the centre was planning to raise the retirement age from 60 to 62. This time, retirement age makes headlines one again that the superannuation age may be decreased to 58.

Last week the most popular website for CG Employees, www.gservants.com has published an article about the recommendations of 7th CPC, as unconfirmed news. In this, 7th CPC may recommend for reduce in age of retirement of CG Employees will be in two criteria. The retirement age as the completion of 33 years of service, or at the age of 60, whichever comes first. The panic was further increased by similar claims on Facebook and Whatsapp also, because the criteria for retirement as at the age of 58 or completion of 33 years.

On the internet, this condition was distorted as 33 years of service or 58 years of age, whichever comes first. This caused great worry to all because the 60/33 rule would affect only those who had joined the service before the age of 26, but the 58/33 rule would lead to all those who had joined after the age of 28 to lose two years of service. Also worth noticing is the fact that the service period is very short in such cases.

Nobody is sure yet if the 7th Pay Commission will include the recommendations on retirement age in its report to the government. But, discussions were held on this issue. There is no information about when the decision will be implemented.

Reducing 60 to 58 is like ‘losing the sword and growing the tail.’