You are here: Home / Cadre Restructure / NFCAA publishes Cadre Review Proposal and Charter of Demands for the proposed meeting with CGA 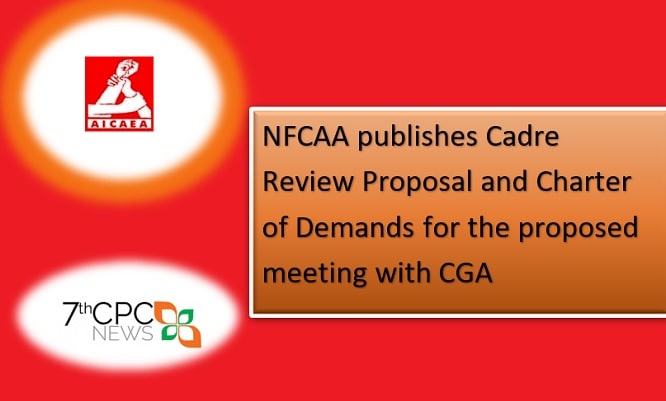 Sir,
In continuation of NFCAA letter No: – NFCAA/HQ/A-2/2015/366 dated 01.05.2015, we are enclosing herewith the CADERE REVIEW proposal and the list of the items (Charter of Demands) we wish to discuss in the meeting we have requested for.

The date and time of the meeting may kindly be informed to us atleast a fortnight ahead so that our outstation National Executive members could procure Railway Reservations for attending the meeting.

Copy to the all Federal Executive Members.

As per para 2(iii) of DOPT Order No.20/51/2009-CS.II (A)(Vol.II) dated 25th February, 2011 – 625 newly created posts of PPS have been allocated against Joint Secretaries and equivalent level officers in different Ministries/Departments participating in CSSS on functional jurisdiction

1. Restoration of 5% promotional quota to the post of LDC for Gr-D/MTS and clearing of backlog by promoting all eligible MTS to the grade of Accounts Assistant as a onetime measure.

2. Formation of independent Department Of Accounts under CGA.

3. Filling up of vacant posts – regularization of contract /outsourced workers as per orders dated 23-01-2013 issued by Ministry of Labour – grant of minimum wage to those who are working against regular posts.

5. Adoption of mutually agreed transfer policy for AAOs and implementation of the policy transparently and filling up of vacant posts by providing promotions to Civil Accounts Employees.

6. Provision of alternative accommodation and amenities to the Central Office of AICAEA.

7. Imparting training and grant of incentive for implementation of e-payment system.

9. Allotment of one seat in the National Council,(JCM) and 2nd seat in Departmental Council(JCM) to All India Civil Accounts Employees Association.

12. Removal of injustice to newly recruited Accountant in the matter of granting 1st increment through rectification of the procedure of Departmental Confirmatory test and also imparting training to the candidates.

13. Grant of two financial up gradation to MTS under ACP scheme who had completed 24 years of service before implementation of MACP Scheme as has done by the O/o the Pr. of Audit and Director, Economic service Ministries, Delhi vide order No:- AMG.I/Admn-1/32 dated 24.06.2014 .

14. Grant of Headquarter allowance to Sr.PS/PS/Stenos posted in office of CGA.

15. Removal of anomaly in grade pay arisen in PAO, CRPF after amalgamation of the office in Civil Accounts Organization.

17. Decentralization of CPAO and formation of regional offices to make the very purpose of operation of Pension Accounting Offices effective and conveniently accessible to old aged Pensioners.

18. Relaxation for revision of option for fixation of pay in the revised pay structure for persons promoted to the grade of Asstt. Accounts Officer (AAO) after 01.01.2006.

19. As has been done in earlier occasions and granted by Defence Accounts Department, Grant of honorarium for checking of pay fixation cases and pension cases after implementation of 6th CPC recommendations.

20. No redeployment of retired officers and employees in the Civil Accounts Organization.