Red salute & Revolutionary greetings to all

United we stand .. divided we fall ….

The AIPEU-GDS CHQ convey its sincere thanks to all GDS comrades for their support, cooperation, encouragement during the period of 16 days indefinite strike from 22nd May to 06th June 2018.

The strike is a historical and heroic-one in the history of Postal Trade Union movement in India. This is the strike against ‘discrimination shown by the Department & Government’, ‘anti-worker policy of the Govt’. and for ‘self-respect’ of GDS all over the country. This is only a first step and there are miles to go for the cause of GDS and our goal is ‘civil servant status to GDS’,

The decision taken by our CHQ in consultation with NFPE leadership to serve strike notice is quite right as it was discussed elaborately in our 3rd AIC, Allahabad and decided to go on indefinite strike during May 2018. The BEDEU served strike notice and went on strike from 14th May. The AIGDSU & NUGDS served strike notice on 03rd May to commence their indefinite strike from 22nd May. Even though our union is not consulted on the strike issue, to oppose the policy of the Govt and regarding GDS for immediate implementation of Kamalesh Chandra Committee Report and also to maintain total unity amongst GDS cadre, it is decided to serve notice by our Union for indefinite strike from 22nd May itself. BEDEU expressed their inability to share our platform. Our stand during negotiations and subsequent decisions was that unity should be maintained and our Union should not withdraw from the strike unless and until all other GDS unions also decided for withdrawal of strike. The initiative taken by our leadership in making personal contacts with other GDS Unions and timely decisions resulted in building up total unity of 3 lakhs GDS and maintaining it throughout the strike, till end.

The GDS CHQ express its sincere thanks to NFPE CHQ, NFPE & FNPO leadership for extending full support and solidarity by giving call for nationwide wearing of black-badge, demonstration, dharna, and relay hunger fast. CHQ appreciates the decision of the P4 CHQ to serve strike notice in support of GDS strike from 23rd May and it is continued till the GDS strike end.

Various types of agitational programmes conducted during the 16 days viz., rallies, demonstrations, public meetings with participation of distinguished public representatives, submission of memorandums at various levels of Govt & administrations by our GDS in all Circles.

It is very much regret to mention here that this strike caused the lives of about 8 GDS comrades all over India. CHQ convey its deep grief on their demise and condolences to their family members.
The 16 days strike caused total disruption of rural postal services due to closing of 1.29 lakh Branch Post Offices and paralyzed the rural postal system in all the Circles. From the beginning to end the GDS are determined to continue the indefinite strike till the demand is resolved. The frustration prevailed among the GDS due to discrimination and delay lead to an emotional situation leading to total strike for 16 days. The Union leaders were cautioned by the cadres not to withdraw the strike and messages floated in SMS & What’sapp.

From 18th May to 5th June, many rounds of discussion took place in formal and informal meetings with the Officers of the Department besides two days reconciliation meeting with Regional Labour Commissioner (Central), New Delhi with four strike participant GDS Unions resulted in vain. Every time, the Department appealed for calling off the strike without any written assurance/agreement on our demand. All GDS unions taken a firm stand unitedly to continue the strike till an honourable settlement is reached.

The positive response in favour of GDS from public, political parties & leaders, MPs, MLAs, MLCs and many other public representatives, Trade Unions compelled the Govt and Department to change their stand. Thus major recommendations of Kamalesh Chandra Committee on wage increase approved in the Cabinet meeting held on 6th June 2018. Though other recommendations are still pending, as the major demand is approved all the GDS unions unanimously decided to call off the indefinite strike on 16th day i.e., 06th June. Comrades, we should be very vigilant that any major deviations from the recommendations of Kamalesh Chandra Committee, our union along with other GDS Unions and with the support of Federations will start agitation programmes, if necessary.

AIPEU-GDS CENTRAL WORKING COMMITTEE MEETING:: 04TH SEPTEMBER 2018: It is notified by CHQ that the Central Working Committee meeting of AIPEU-GDS will be held on 04th September 2018 in New Delhi. Notice and agenda will be circulated soon. CWC will review the entire situation after the strike and organizational issues would also be discussed and suitable decisions will be taken.

ONE DAY STRIKE OF CENTRAL GOVT EMPLOYEES AND WORKERS ON 15 NOV,2018: The National Convention of Central Govt employees held on 10th June 2018 in Hyderabad Employees unanimously decided to conduct one day strike on 15th November 2018. “grant of Civil servant status for GDS” has been included as an important demand in 10 point charter of demands. As an affiliate of Confederation, AIPEU-GDS members also should participate in all the programmes including one day strike called by the Confederation of Central Govt employees and workers. State Govt employees of all the States will also participate in the strike on 15th Nov 2018. Another Circular will be issued in detail.
On 5th September 2018 Confederation, NFPE and many other class and mass organizatgions are going to conduct massive rally in New Delhi. As an affiliate of Confederation and NFPE, the GDS members of AIPEU-GDS have to participate in the programme. All the Circle Secretaries and CHQ office bearers nearby Delhi are requested to mobilize the GDS members for 4thSep programme and make it a grand success.

Financial Position of CHQ:
It is well aware to all the members that AIPEU-GDS is well established in almost all divisions in all circles during the last 6 years period. We have participated in the recent membership verification (Sep-2017) and got more percentage of membership for recognition. It is stopped abruptly by the department and re-verification is yet to be ordered. To run our organization much more effectively at CHQ level, it needs financial support from the members. It is requested that during drawal of arrears of GDS Pay Committee, every member shall donate minimum Rs.100 (maximum amount may be remitted as per your capacity) to CHQ through the divisional / Circle Unions to fulfill the utmost needs of CHQ. All Branch / Divisional / Circle Secretaries are requested to approach the members for their generous financial contributions to our Union ensure the support to CHQ positively.

Address of the CHQ:
General Secretary,
AIPEU-GDS
Dada Ghosh Bhawan
2151/1, New Patel Road
New Dehil – 110 008
…..
Remittance will be made by MO to the above address & with full address of remitter. 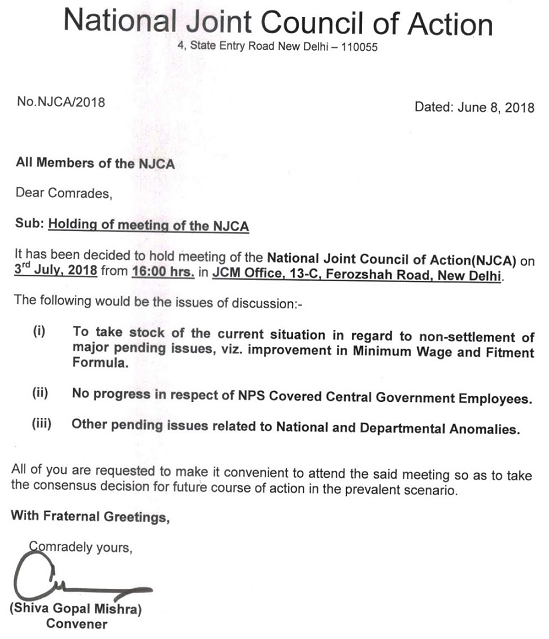