You are here: Home / Defence Establishments / Gist of the meeting held with Hon’ble Defence Minister on 07.12.2014

The Hon’ble Minister further stated that he shall be touring various units from January 2015 onwards to have a first-hand experience of the situation and if the need so arises, shall hold another round of talks with us. 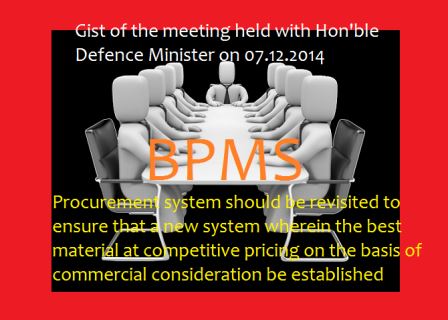 To,
The Office Bearers, CEC Members,
President / Secretary of the unions
Affiliated to BPMS

Ordnance Factories should be fed with proper and unfluctuating load for its growth and continuity of production.

In spite of being a manufacturing unit, in the absence of AHSP responsibility, the OFs are unable to carry out need based modifications in product specification and hence some modalities should be evolved so that OFB may modernize the weapons/equipments as and when required.

Alternate source of R&D should be opened by channelizing the potential of IIT’s with OFs so that an atmosphere for better and latest technology absorption can be created.

In Army Base Workshops and Naval Dockyards/Ammunitions Depots , in spite of availability of in-house infrastructure, outsourcing is being resorted to, this may be stopped.

Efforts should be made to construct own Proof Range for OFs.

Areas of Electronics warfare and Missile technology should be boosted.Page 2 of 2

In areas where TOT has taken place, emphasis should be laid on indigenization by resorting to alternate IS specification materials.

There has to be a time-frame in which user trial observations/deficiencies, if any, to be reported.

OFs should be given the opportunity to produce the mounted 155mm/52 cal Artillery Gun.

The practice of self-certification should be encouraged and DGQA should play the role of Quality Auditor and its inspection should be limited to input material from trade sources.

Modernisation of Army Based workshop and Base Repair Depots of Air Force.

Procurement system should be revisited to ensure that a new system wherein the best material at competitive pricing on the basis of commercial consideration be established.

Effective utilisation of existing resources of MES, MFs, ODs, and such other allied establishments and stoppage of any kind of outsourcing.

The Hon’ble Minister gave a patient hearing to the points and made it clear that while there will not be corporatization of any government held sector in Defence, but these units should ensure efficient delivery of requirements and he may undertake certain structural changes needed for such an ultimate objective.

The Hon’ble Minister further stated that he shall be touring various units from January 2015 onwards to have a first-hand experience of the situation and if the need so arises, shall hold another round of talks with us.