You are here: Home / CCS Rules / Filing Assets and Liabilities by Public Servants 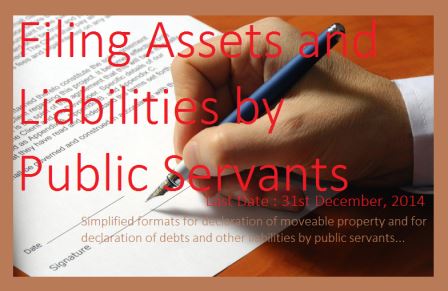 Section 44 of the Lokpal and Lokayuktas Act, 2013 mandates that every public servant (as defined in the Act, which includes Ministers, Members of Parliament, Government employees, employees of statutory bodies, PSUs, etc.) shall make a declaration of his assets and liabilities as well of his spouse and dependent children in the manner as provided by or under the said Act.

In exercise of the powers conferred by sub-section (1) read with clause (k) and clause (l) of sub-section (2) of section 59 of the Lokpal and Lokayuktas Act, 2013 (1 of 2014), read with section 44 and section 45 of the said Act, the Central Government has notified the Public Servants (Furnishing of Information and Annual Return of Assets and Liabilities and the Limits for Exemption of Assets in Filing Returns) Rules, 2014 in the official Gazette on 14th July, 2014, which, inter alia, contain the forms in which such information/return is required to be filed.

Subsequently, concerns and apprehensions were raised by several Ministries/Departments and other stakeholders, inter alia, about the complexity involved in furnishing the desired details in the forms prescribed under the Rules.

Accordingly, the Government of India vide its order dated 28-08-2014, constituted a Committee to simplify the forms and the process in which public servants shall make declaration of assets and liabilities.

The Public Servants (Furnishing of Information and Annual Return of Assets and Liabilities and the Limits for Exemption of Assets in Filing Returns) Rules, 2014 have also been amended by a notification dated 8th September, 2014, by which the time limit, for furnishing of such information/return by public servants, has been extended till 31st December, 2014.

This was stated by Minister of State for Personnel, Public Grievances & Pensions Dr. Jitendra Singh in a written reply to Shri Sudheer Gupta & others in the Lok Sabha today.