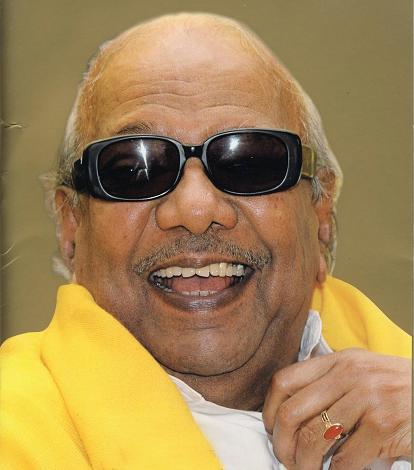 The TN State Government has declared a public holiday on 8th August, 2018. Government Offices including Schools and Colleges to remain closed on 8.8.2018 (Wednesday).

President Ram Nath Kovind said in a message that he is extremely sad tolearn about M Karunanidhi’ death.

Mr Kovind termed Mr Karunaidhi as a doyen of public life, a contributor to the development of Tamil Nadu and of India.

Vice President Venkaiya Naidu described Karunanidhi as one of theleading and longstanding politicians of the country who left a mark of his ownduring his long public life of about 80 years.

Prime Minister Narendra Modi in his message said the country has lost adeep-rooted mass leader, prolific thinker, accomplished writer and a stalwartwhose life was devoted to the welfare of the poor and the marginalised.

Mr Modi said he stood for regional aspirations as well as nationalprogress and he was steadfastly committed to the welfare of Tamils and ensuredthat Tamil Nadu’s voice was effectively heard.

The Prime Minister said his thoughts are with the family and thecountless supporters of Karunanidhi in this hour of grief. He said country andparticularly Tamil Nadu will miss him immensely.

“Deeply saddened by the passing away of Kalaignar Karunanidhi. He was one of the senior most leaders of India. We have lost a deep-rooted mass leader, prolific thinker, accomplished writer and a stalwart whose life was devoted to the welfare of the poor and the marginalised.

Kalaignar Karunanidhi stood for regional aspirations as well as national progress. He was steadfastly committed to the welfare of Tamils and ensured that Tamil Nadu’s voice was effectively heard.

I have had the opportunity of interacting with Karunanidhi Ji on several occasions. His understanding of policy and emphasis on social welfare stood out. Firmly committed to democratic ideals, his strong opposition to the Emergency will always be remembered.

My thoughts are with the family and the countless supporters of Karunanidhi Ji in this hour of grief. India and particularly Tamil Nadu will miss him immensely. May his soul rest in peace”, the Prime Minister said.

The Government of India announces with profound sorrow the death of Dr.M.Karunanidhi, Former Chief Minister of Ramil Nadu on 7.8.2018 at Kauvery Hospital, Chennai

As a mark of respect to the departed Dignitary, the National Falg will fly Half-Mast on the 8.8.2018 in Delhi and Capitals of all States/UTs and throughout the state of Tamil Nadu. It has also been decided to accord state funeral to the departed leader. The Funeral will take place at Chennai on 8.8.2018 in Chennai. The Government of India will observe one day state mourning throughout India on 8.8.2018 and there will be no official entertaiment on the Day.

This is for information of all State Government / Union Territory Administrations.

Tamil Nadu Government has declared a Government Holiday tomorrow. All the Schools, Colleges and Government Offices in the State of Tamil Nadu would remain closed tomorrow.

What about Central Govt Offices Tomorrow(8.8.2018) in Tamil Nadu?

We reproduced the letter and given below for your ready reference…

We share the grief of the whole Tamilnadu in the demise of the leader and former Chief Minister Kalaingar Karunanidhi.

As expected, tomorrow has been announced as public holiday for State Government offices. There will be a total shut down with no public transport plying. Further, the entire police will be diverted to State capital to handle the security arrangement. Against this situation, we request our circle administration to take stock of the situation and to provide necessary security to post offices.

We also further request to cause declaring holiday for our establishment for tomorrow keeping in view of the State Government response to the situation.

Our staff will be stranded or can not safely reach the work place in the absence of transport and have to face other risk fraught in law and order.

Infact staff are presently facing much difficulties to reach home due to the total suspension of transport.

Kindly do the needful early.

Discipline, Training and Skilling are Crucial for Every Profession: Vice President Vajpayee Death: Holiday Declared on 17.8.2018 in TN No Holidays for CG Offices – Funeral of Dr. A. P. J. Abdul Kalam will be held at 11 AM at Rameswaram on 30.7.2015 PM condoles the passing away of former President of India, Dr. APJ Abdul Kalam TN Govt Declared Holiday on 5.11.2018 Half Day Holiday for all CG Offices on 17.8.2018 Karunanidhi Death: What about Central Govt Offices Tomorrow(8.8.2018) in Tamil Nadu? Special Passes for Medical Treatment – RBE 178/2018 Revised entitlement of Privilege Passes – NFIR