“Constant Attendance Allowance shall be paid on monthly basis during the period of award along, with disability or war injury pension as the case may be.”

Sir,
The undersigned is directed to state that as per Regulation 89 of Pension Regulation for the Army Part-l (Edn-2008) and equivalent provisions in Navy and Air Force Pension Regulations, payment of Constant Attendance Allowance is made in arrears twice in a year along with disability pension/ war injury pension on the basis of declaration/certificate submitted by the pensioner to his/ her pension disbursing agency (PDA) in May and November each year subject to fulfillment of other prescribed conditions.

2. Keeping in view of the hardships being faced by the disabled pensioners in claiming Constant Attendance Allowance. Government was reviewing the said provision from quite some time. In partial modification of above provision, the President is now pleased to decide that henceforth Constant Attendance Allowance shall be paid on monthly basis during the period of award along, with disability or war injury pension as the case may be.

3. Concerned Armed Forces Pensioners shall submit a declaration on the format enclosed as Annexure with this order to their pension disbursing agency at the time of initial payment of CAA and thereafter on annual basis at the time of his/her annual identification. During initial declaration pensioner shall state in item III of the Annexure that he/she will employ an attendant for the upcoming one year or up to the date for which CAA has been sanctioned whichever is earlier. During subsequent annual declarations pensioner would also complete item II of the Annexure providing a declaration for the period from the date of last declaration. Payment made against declaration under item III of Annexure shall be treated as provisional and would be final on submission of subsequent declaration under item II.

4. In case a pensioner drawing CAA becomes inpatient in any Government Hospital / Institution or is gainfully employed, he shall immediately report the matter to the FDA. Since, CAA is being paid, on the basis of annual declaration, any overpayment on account of CAA noticed with reference to the declaration quoted above, shall be adjusted from the monthly pension due to the pensioner.

5. All other team and conditions. for grant and payment of Constant Attendance Allowance which are not. affected by this order, shall remain unchanged. Pension Regulations of the three Services shall be amended in due course. 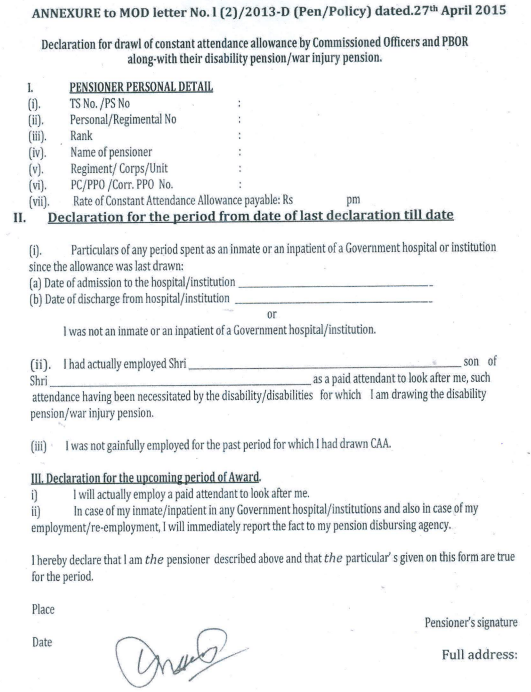