Assessment of INDWF of the recommendations of 7th Pay Commission

ASSESSMENT OF INDWF OF THE RECOMMENDATION OF 7TH CPC

Minimum Pay : Though the Commission claims to have adopted Dr. Aykroyd formula in calculating minimum wages, the rates of commodities based on which the recommendations of the commission is made is significantly deviating from the rates mentioned in the National Council of JCM proposal.

The JCM proposal in this regard should be reiterated. A comparison between existing and proposed VII CPC minimum pay is given below. The retrograde nature of the commission’s recommendations in this regard can by understood by this table.

From the above picture, it is clear that the VII CPC recommendations are not giving fair wages and the total pay increase is meager for next 10 years. Therefore, the minimum pay needs to be increased accepting the proposal of National Council JCM.

NEW PAY STRUCTURE : The present system of pay bands and grade pay has been dispensed With and a matrix has been recommended. The New system is an extension of system Of Pay Scales, albeit, with a progressive Increment of 3% instead of fixed Increments. Unlike VI CPC, Minimum pay fixed on promotion is at par with the initial pay fixed direct recruits in the same grade.

However, the fixation benefits on promotion, particularly from Level 2 to 3, 3 to 4 & Level 4 to 5 is significantly less compared to VI CPC Structure. National Council JCM demand of fixation benefit of two increments Should be reiterated or at least 5% should be ensured. A comparison of the promotion benefit for the after 10 years of service in their respective grades is given below. 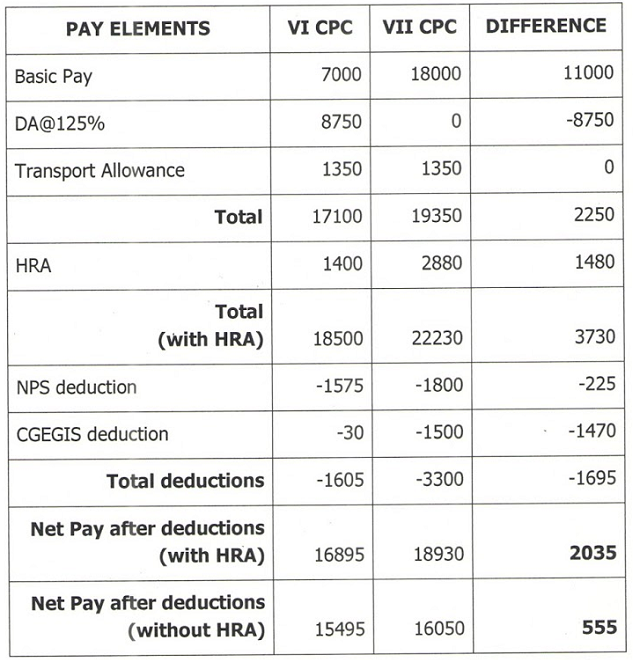