The Department of Pension and Pensioner’s Welfare will hold five Aadhaar Seeding and Regularisation for pensioners in Delhi NCR in collaboration with Punjab National Bank from 13th to 17th July, 2015. These camps will be held at Rajendra Place, Civil Lines, Scope Tower – Lakshmi Nagar in Delhi and Noida Sector 1 and Neelam Chowk, Faridabad respectively.

Pensioners residing in the Delhi NCR may visit an Aadhaar Camp on any one of the days with original PPO, Aadhaar Card, and bank pass book along with photocopies of these documents.

Pensioners who do not have Aadhaar number yet may in addition carry a photo id like Voters Card. Jeevan Pramaan is in addition to the other existing facilities for submission of Life Certificate. All the Nationalised banks, as also UIDAI will participate in these camps which are proposed to be held later in other parts of the country.

Camp Timings: 9am to 5pm 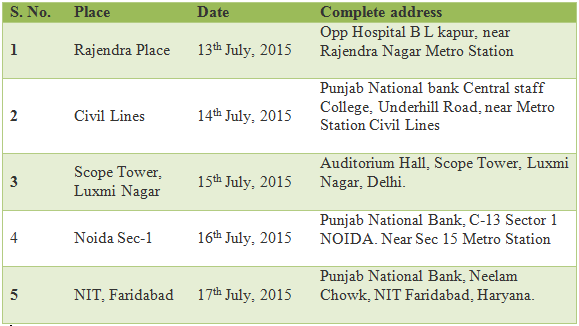