You are here: Home / Modi Government / 3 years of Modi government – A report card 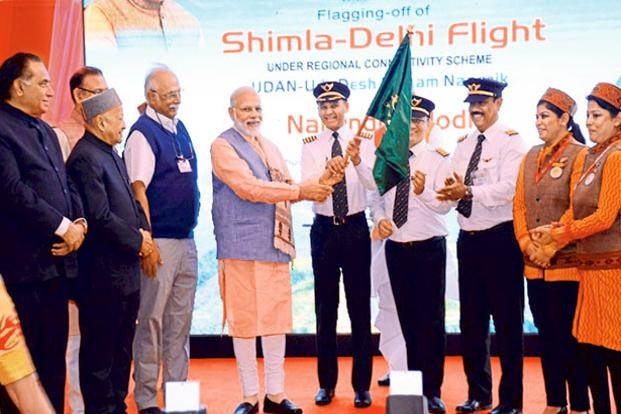 The record of the Bharatiya Janata Party (BJP)-led National Democratic Alliance (NDA) during its three years in power has been impressive, judging by macroeconomic parameters, especially inflation.

Politically too, the BJP has seen unprecedented ascendancy by wresting back power in Uttar Pradesh in March after a gap of 15 years and expanding its electoral footprint to the North-East. This in part explains why Prime Minister Narendra Modi remains India’s most popular political leader.

Still, controversies associated with the actions of fringe saffron groups have left the BJP vulnerable to criticism. The next general election is due in 2019 and, to a large extent, the outcome will depend on Modi’s management of the optics and his government’s ability to generate jobs to meet the growing aspirations of voters.

Here is a look at the key themes of the NDA’s three years in power.

2. Sagarmala and Bharatmala programmes for the construction of new ports and expressways.

2. 23km per day of highway construction achieved vis-a-vis a target of 41km.

1. Carried out surgical strikes across the Line of Control (LoC) in Kashmir, resumed cordon and search operations in more than 20 villages in Shopian.

1. No strategy to pre-empt rebel attacks on security personnel in districts where Maoists are active.

2. Ties with Pakistan and China are icy despite Prime Minister Modi making trips to both countries (a December 2015 stopover in the former).

3. Relations with Russia—India’s once time-tested friend—too seem to be in the doldrums.

2. Set an ambitious goal to double farm incomes in real terms by 2022, moving away from the historical focus on increasing production.

3. Initiated a range of marketing reforms to create a “one nation, one market” in agriculture.

1. Decline in wholesale prices of vegetables and pulses has dented farm incomes.

2. A loan waiver in Uttar Pradesh led to a moral hazard problem and delay in repayment of loans in other states.

3. Acute drought in southern states led to a spike in farm suicides.

3. Clean and renewable energy generation gets a boost.

1. Neglect of the forest and wildlife sectors. Decisions pending on a national forest policy, definition of forests, inviolate forest areas and a national wildlife action plan.

2. Activists allege that the government is favouring industries and indiscriminately giving green clearances, ignoring the toll taken on the environment.

3. Ganga clean-up is yet to gather momentum.

1. Got states on board to introduce the goods and services tax (GST), the biggest tax reform since independence.

2. Crackdown on black money leads to a surge in 2016-17 tax receipts, number of return filers.

3. Merger of railway budget with Union budget and shifting budget presentation date to 1 February from 28 February.

2. Pending cases of retrospective taxation on past transactions still unresolved.

3. Inability to bring back black money stashed away abroad by citizens.

1. Getting unanimity on the economic reforms agenda with high parliamentary productivity.

3. Expanding voter base of the BJP to Dalits and other backward classes, focus on expansion in the North-East.

1. Failure to get consensus on reform policies like a proposed land bill.

3. Problems within the NDA: the Peoples Democratic Party (Jammu and Kashmir), Shiv Sena (Maharashtra) and Telugu Desam Party (Andhra Pradesh) are annoyed with the BJP leadership.

2. Slew of social security measures to benefit the working class.

3. Job creation yet to pick up pace.

1. Hyper-nationalism as seen through the lens of social media trolling and rise of vigilante groups with little regard for human life.

2. Rise of vigilante groups with political agendas who attack minorities.

3. In spite of stricter laws, greater awareness and even campaigns, violence against women continues unabated.

2. Drop in digital payment transactions with the easing of a cash crunch that followed the demonetisation of high-value banknotes in November.

1. Doing away with the red beacon—a symbol of so-called VIP culture—from all government vehicles.

2. Extending support to ending the practice of triple talaq.

2. Launch of the anti-Romeo squads in Uttar Pradesh, ostensibly to protect women from harassment, but seen widely as moral policing.

3. Ghar Wapsi (homecoming), aimed at promoting the conversion of non-Hindus to Hinduism, and campaign against Love Jihad, allegedly practised by Muslim men to win over Hindu women.