Subscriber details of CG Employees under National Pension System as on 3.10.2015

Number of subscribers and their asset details of Central Government employees under National Pension System as on 3rd October 2015 has been published by PFRDA. More than 15 lakh CG employees registered under NPS and their ‘Asset Under Management’ value have more than 42 thousand crore. All employees unions and federations including NC JCM

NPS has been implemented for all Government Employees (except armed forces) joining Central Govt. on or after 01 January 2004. Most of the State/UT Governments have also notified the National Pension System (NPS) for their new employees. NPS has been made available to every Indian Citizen from 01st May 2009 on a voluntary basis.

Further, from 1st June 2015, the Atal Pension Yojana, has been launched which has given the much required impetus to the social security schemes Currently, NPS and APY together have more than One Crore subscribers with total Asset Under Management (AUM) of Rs.1,00,275 crores. The segment wise status of the NPS and APY as on 03.10.2015 is as under:

PFRDA has taken various steps at the policy as well as operational level to make NPS more subscriber friendly. In addition to this additional tax benefits made available exclusively to NPS has given a fillip to the scheme. This is further expected to result into a substantial increase in the subscriber base by end March 2016.

The following steps have been taken in the recent past for the convenience of the subscriber:

The investment guidelines for NPS have been revised to expand the investment avenues for optimisation of the returns.

Partial withdrawal upto 25% of subscriber’s own contribution for specific purposes like higher education of children, marriage of children, construction of house and specified illness have been allowed to the NPS subscribers after
completion of 10 years in NPS.

NPS Subscriber can defer the withdrawal of lumpsum amount upto the age of 70 years and also have the option to defer purchase of annuity upto 3 years from the date of superannuation or 60 years. The funds during this period remain invested in the system.

The Statement of Transactions (SOT) being sent by CRA to the existing subscribers has been modified to reflect the returns of the individual subscriber since the date of account opening and also the return generated during the last
financial year.

To facilitate and operationalize the deposit of additional contribution of Rs.50,000/- to avail of the additional tax benefit under Section 80 CCD(1B), Government Subscribers already covered under NPS have been provided the
facility to deposit voluntary contributions in their Tier I account through any POPSP. Government employee covered under old pension scheme can also avail this tax benefit by opening individual Tier I account through any POP-SP and contributing to the same.

Online reset of password and facility to change mobile no. and email Id have been provided to all the NPS subscribers.

SMS alerts on balances in the NPS account being sent to the subscribers on quarterly basis, in addition to regular monthly alerts on contribution and other changes in the PRAN.

APY scheme provides minimum Govt guaranteed monthly pension to subscribers ranging from Rs 1000 to Rs 5000. Further, Govt. of India also co-contributes 50% of the total contribution made by a subscriber during a financial year subject to maximum of Rs 1,000/- per annum for a period of five years, if eligible subscribers open the account by 31st December 2015. All Indian Citizens, in the age group of 18-40 years are eligible to join the scheme through any bank branch. About 8 lakh subscribers have joined APY till date. 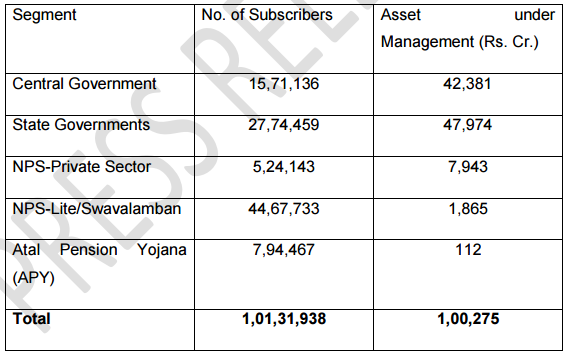