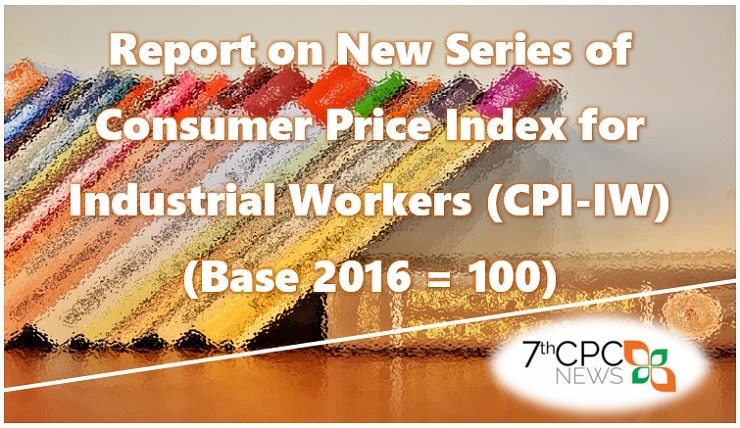 It is indeed a pleasure to learn that the Report on “New Series of Consumer Price Index for Industrial Workers (Base 2016=100)” has been prepared by Labour Bureau with respect to of the new series of Consumer Price Index, Industrial Workers CPI-(IW) with base 2016=100. This report provides comprehensive detail of key concepts, definitions and methodology used in the revision of CPI-IW base year from 2001 to 2016.

CPI-IW is a vital economic indicator which measures the change in prices of goods and services consumed by the index population. This index is also of high significance to the Government for it is used for regulation and determination of Dearness Allowance (DA) being paid to millions of Central/State Government employees and also to the workers in the industrial sectors besides fixation and revision of minimum wages in scheduled employments. Labour Bureau compiles the indices as per international best practices & guidelines of ILO. The dissemination of CPI­IW is also Special Data Dissemination Standard (SODS) compliant.

One of the most important mandates of the Labour Bureau, an attached office of Ministry of Labour and Employment. is base updation of the prominent economic indicator i.e. Consumer Price Index for Industrial Workers (CPl-IW). The details included in the Report “New Series of Consumer Price Index for Industrial Workers (Base 2016=100)” are expected to bring out inter-alia harmonisation in concepts, definition, methodology of compilation of data/information on CPl-IW. The adoption of the methodologies’ suggested in this Report can go a long way in facilitating the data aggregation and data comparison, both at inter-regional and intra-regional levels besides international comparisons.

It gives me immense pleasure to unveil this report on the occasion of formal release of new series of CPl-IW by the Hon’ble Minster of State (Independent Charge) Labour & Employment with base year 2016 which would replace the current base which was done 19 year back in the year 2001.

But none of them was entirely satisfactory. In pursuance of the recommendations made by the Rau Court of Enquiry, the job of compilation & maintenance of Consumer Price Index Numbers for Industrial Workers was taken over by the Central Govt. in 1941. However, the compilation of index numbers on uniform and scientific lines was started only after the conduct of the Family Living Surveys by the Labour Bureau during 1958-59 at 50 important industrial centres, spread over length and breadth of the country, under the guidance of the Technical Advisory Committee on Cost of Living Index Numbers and compilation of Consumer Price Index Numbers for Industrial Workers on base 1960=100. Since then the compilation and maintenance of Consumer Price Index Numbers for Industrial Workers are being done by the Labour Bureau on a continuous basis. The series ( 1982= 100) had replaced the old ( 1960= 100) series with the release of October, 1988 index. Thereafter, the ongoing series on base 2001=100 has replaced the earlier (1982=100) series in 2006.

Index numbers in statistics are indicators of changes in certain economic, social and related phenomena. Most of the current indices are indicators of changes over time in respect of economic characteristics like prices, output, wages, etc. These are termed as price index, production index, wages index, etc. Price indexis ameasure of how prices change over a period of time, or in other words, it is a way to measure inflation.

The present document deals with the Consumer Price Index for Industrial Workers (CPI-IW), one of the prominent economic indicators, which measures the relative changes in retail prices over a period of time in respect of a fixed set of goods and services consumed by an average working class family in a given area with reference to a base year. The changes in consumer prices affect the real purchasing power of households’ money incomes and hence, the standard of living or welfare that they can achieve out of a given money income/ expenditure.

Labour Bureau an attached office of Ministry of Labour and Employment, since its inception has, inter-alia, been entrusted with the responsibility of compilation, maintenance and disseminating of the CPI­ IW.The CPI-IW is compiled as per international best practices & guidelines of ILO and dissemination of CPI-IW is Special Data Dissemination Standard (SDDS) compliant. It is released on last working day of subsequent month.

The CPI-IW is mainly used for regulating and determination of dearness allowance (DA) being paid to large number of Central/ State Government employees and also to the workers in the industrial sectors besides fixation and revision of minimum wages in scheduled employments, hence, having significant financial implications to the Public Exchequer. Further, CPI numbers are widely used as macroeconomic indicator of inflation, and also as a tool by government and central banks for targeting inflation and monitoring price stability. CPI is also used as deflators in the National Accounts. Therefore, CPI is considered as one of the most important economic indicators.

The first two indices are compiled and released by the Labour Bureau, Ministry of Labour and Employment and are specific to population segments. The third is released by the MOSPI. The MOSPI started releasing comprehensive CPis on base 2010=100 for all-India and States/ UTs basis separately for Rural, Urban and combining them to arrive at one CPI (Combined) every month with effect from January, 2011. It revised the base year of the CPI from 2010=100 to 2012=100, incorporating many methodological improvements in consonance with the international practices.

The Government of India has constituted Expert Committees/ IRCs from time to time to review and report on various aspects of the CPI-IW including the methodology for deriving the weighting diagram, issues relating to conduct of Working Class Family Income & Expenditure Surveys (WCFI&ES), methods of compilation and linking factor, to study and report on the existing price collection procedures and machinery of price collection to make extensive evaluation of the indices and illuminate on improved practices to incorporate while updating the base. Following are the committees set up for CPI-IW:

N ilakanthaRath Committee in 1977 to examine 1960 based series of index numbers.

K. C. Seal Committee in 1980 to examine the details of the proposed family living survey ( 1981-82) for industrial workers and compilation of new series based on the results of the survey.

G . K . Chadha Committee in 2006 to advice Government on matters relating to issues pertaining to Consumer Price Index Numbers for Industrial Workers (CPI-IW) with base year 2001=100.

Base year updation at a gap not exceeding 10 years

Consultations with stakeholders from very beginning till the end of survey
Standing Tripartite Committee (STC) to be constituted of all the stakeholders like Trade Unions’, Employers Organisations’, Central/State Government Departments, Women’s Organisations and representatives from the newly emerging sectors
Coverage of sectors be extended beyond existing seven sectors
Number of centers to be reviewed and new upcoming centers to be added

The ongoing series of CPI-IW is with base year 2001=100 covering 78 centres spread across the country. To capture the latest consumption pattern of working class family, the Labour Bureau had undertaken the base revision exercise of CPI-IW with base 2016=100.

The consumption pattern of the working class population has undergone change over a period of time and therefore, it becomes necessary that the consumption basket is updated from time to time to account for these changes and thus to maintain the representative character of the index. The need for frequent revision of base on account of fast changing consumption pattern of the target group has been recommended by various National and International level agencies like International Labour Organization, National Statistical Commission, National Commission on Labour and Technical Advisory Committee on Statistics of Prices and Cost of Living (TAC on SPCL).

This recommendation was strongly reiterated by the Index Review Committee (IRC) set up under the Chairmanship of Prof. G.K. Chadha, who was a member of Prime Minister’s Economic Advisory Council, which inter­ alia stated that the intervening gap between the two series should not exceed 10 years. Labour Bureau accordingly, has initiated the process to revise the base year of the existing CPI-IW series 2001=100 to a more recent base year 2016=100. The major recommendations of this committee have been considered and incorporated in the base revision of CPI-IW (new series).

The various technical issues like coverage of sectors, selection of centres, fixation of sample size, reference period, conduct of working class family income &expenditure survey, etc., involved in the work of base updation have been discussed at length and decided by the technical bodies. The National Sample Survey Office conducted the field work for collecting the income and expenditure data from the 88 selected centres on the behalf of Labour Bureau from January 2016 to December 2016.

Subsequently, the data collected under working class family income and expenditure survey was tabulated by National Institute of Electronics and Information Technology (NIELIT). Besides, the pilot survey for organizing the work for collection of retail prices through the officials of the Labour Commissioner’s Office/ Directorate of Economics and Statistics on a part time basis was done by Labour Bureau and the price quotations are being collected and processed on a regular basis. On the basis of the results revealed by working class family income and expenditure survey (WCFI&ES), the weighting diagrams (average consumption pattern) have been derived in respect of all 88 selected centres. Using the prices pertaining to calendar year 2016 as the base prices, the indices are being compiled through the software developed by NIELIT.