Who are all eligible for purchasing through CSD? 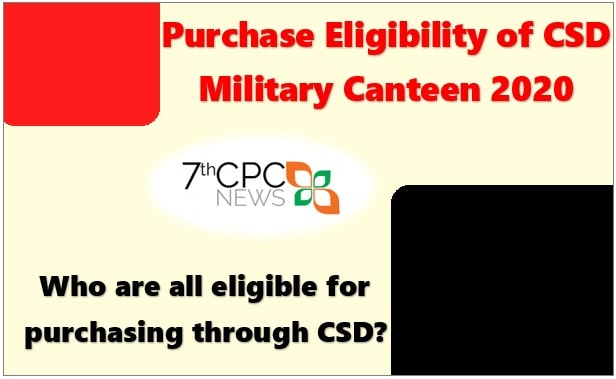 Who are all eligible to purchase a product from the URC canteen? and Who are all entitled to buy a Car, Bike or any AFD Item through CSD?

a) All serving personnel of Armed Forces i.e. Army, Navy and Air Force and their families.

b) All Ex-servicemen pensioners paid from Defence Services Estimates.

c) All Ex-service personnel who have been released from service honorably after five years of colored service but before completion of qualifying personable service and, therefore, are not in receipt of a pension from the Defence Services Estimates.

d) All Ex-service personnel released from Service on compassionate grounds at their own request having put in minimum five years of service.

e) All Ex-service personnel released from service honourably after completion of a minimum of five years of service as a result of a reduction in establishment/completion of a specific period of engagement.

f) All Ex-servicemen released on medical grounds attributable to military service without any stipulation of service rendered.

g) Widows of Service officers including Honorary Commissioned / EC / SSC whether the officer expired while in service or after retirement.

i) Widows of Service officers including Honorary / SSC / EC who get remarried and continue to draw a pension from Defence Services Estimates.

j) Widows of Service personnel other than officers who get remarried and continue to draw pension from Defence Services Estimates.