Subject: Implementation of the Government decision on the recommendations of the cabinet secretary’s Committee- Revision of Pension in Respect of Personnel Below Officer Rank (PBOR) Discharged prior to 01.01.2006.

Table No 60 (Naib Subedar, DSC- On other duties)

4. The above amendments shall take effect from date of implementation of their respective orders. Arrears in affected cases shall be released by pension Disbursing Agencies.

(Manoj Sinha)
Under Secretary to the Government Of India 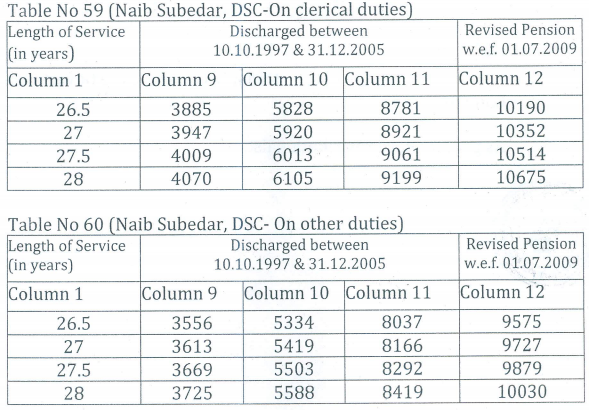 Pension of PBOR Discharged From Service On or After Jan 2006 Revised OROP Table – Improvement in Pension of JCO/OR retired / discharged /invalided out of service prior to 1.1.2006 Revised tables for Minimum Guaranteed Pension/ Ordinary Family Pension – Revision of pension for Pre-2006 JCOs/ORs – MoD Orders 3.9.2015 Revision of Pension for Pre-2006 Pensioners w.e.f. 01.01.2006 instead of 24.09.2012 and Arrear of Pension/ Family Pension will be paid – MoD Order 3.9.2015 7th Pay Commission Pension: Revision of Concordance Tables for Pre-2006 Pensioners Revision of pension in r/o pre-2006 Commissioned Officers/JCOs/ORs pensioners/ Family pensioners Stepping up of notional full pension to Armed Forces absorbees – Revision of 43% and 45% commuted portion of pension of pre 2006