You are here: Home / New Pension Scheme / Number of Subscribers Registered Under National Pension System (NPS) has more than Doubled 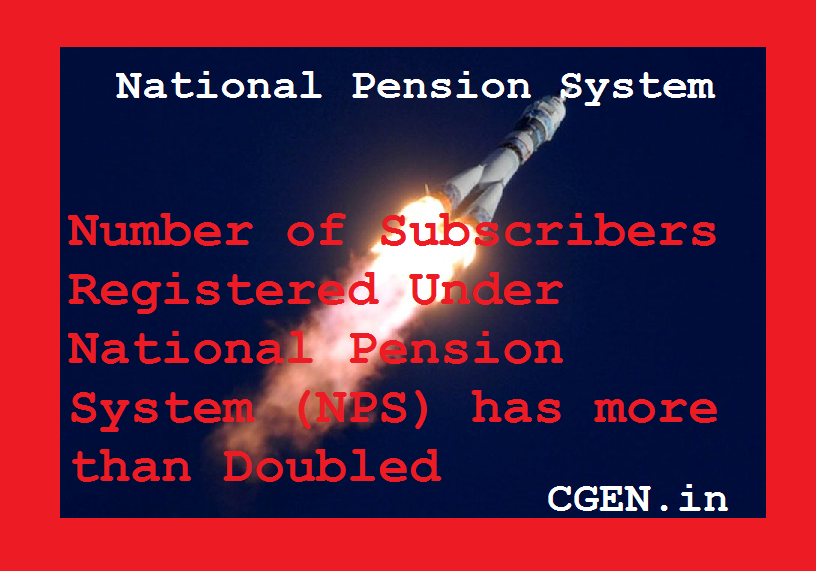 Number of Subscribers Registered Under National Pension System (NPS) has more than Doubled
Since April 2012 from about 11.5 Lakh to 23 Lakh: Chairman,Pfrda ;
Number of States Joining NPS has Increased from 12 to 26 ;

Pfrda Working Towards Notification of Various Regulations in Respect of Efficient Management of Funds, Seamless Grievance Handling and Systems for Risk Mitigation and Containment Among Others

Shri Hemant Contractor, Chairman, Pension Fund Regulatory Development Authority (PFRDA) said that the number of subscribers registered under National Pension System (NPS) has more than doubled since April 2012 from about 11.5 Lakh to 23 Lakh.

He commended the substantial improvement in performance of State Governments since April 2012.

The main objective of the Conference was to focus on progress of performance of the State Governments and also to discuss the implications of the passage and notification of the PFRDA Act for respective States who are offering NPS to their respective employees.

Shri Contractor, Chairman, PFRDA, further said that with the passage and notification of the Act, PFRDA has been conferred with a statutory status.

Its mandate covers development of the pension sector as also framing regulations for the advancement of the NPS and protection of the interest of the subscribers.

He informed the participants that regulations under the Act are expected to be notified within the next two months. The Chairman added that steps have been taken for communicating more frequently with the subscribers to increase awareness levels about NPS.

He directed the State Government officials to regularly visit the PFRDA website for updates on various policies and information. Shri Contractor added that there were various points of concerns which have to be dealt with proactively to protect the interest of the subscribers.

He added that this conference and more in the coming years would act as a platform for discussion with PFRDA and interactions with other states to share their best practices.

Earlier speaking on the occasion, Dr. Anup Wadhawan, Joint Secretary, Department of Financial Services, Ministry of Finance emphasised upon the fact that NPS of the Central and the State Governments forms the backbone of the NPS as it is a direct replacement of the erstwhile DB pension system.

Hence, its proper implementation is very important for the NPS product as well as the sector, he added. Dr. Wadhawan further stressed upon the fact that the State Government Nodal offices need to keep the information in respect of their employees like email ids, mobile numbers and addresses etc. updated in all respects at regular intervals. Dr. Wadhawan further asked the State Governments to sort-out the issue of legacy contributions and inclusion of State Autonomous Bodies in an expeditious manner.

He further called upon the State Governments to further the cause of the Government of India promoted NPS Swavalamban scheme for economically weaker sections of the unorganised sector, through their respective Rural Development Departments.

Shri R V Verma, Member (Finance) laid emphasis on the fact that despite NPS being voluntary in nature; most of the State Governments have proactively adopted it. He further dwelt on the fact that the paradigm shift from the Defined Benefit to the Defined Contribution has put the subscriber’s interest at the centre and the involvement of the subscriber’s justify from the entry into the system up to his/her exit becomes prominent.

He mentioned that the involvement of the State Government Nodal offices, as the first point of interaction of the subscriber attains importance. He added that with the passage of the Act, PFRDA is working towards notification of various regulations in respect of the efficient management of funds, seamless grievance handling and systems for risk mitigation and containment.

He said that synchronization of information and funds is very important in NPS; hence Nodal offices have to lay emphasis on the same. He stated that it is the collective endeavour of the Regulator and the stakeholders involved i.e. State Governments, State Autonomous Bodies (SAB) and their Nodal offices, that a two way feedback process has to be in place to innovate upon the operational aspects of the NPS.

Though it is mandatory to register under National Pension System (NPS) for the joinees/employees of the Central Government who have joined or are joining it on or after 01-01-2004, yet most of the State Governments have adopted NPS voluntarily for their employees from their respective adoption dates. Currently, NPS has 76 Lakh subscribers with total Asset Under Management (AUM) of Rs.68,000 crores. Out of this, State Government sector has approx. 23 Lakh subscribers with AUM of Rs.30,000 crores.