Ganesh Chaturthi Date 2020 in India – Public or Closed Holiday for Govt Office, Bank, Post office and school. According to the notification issued by the Central Govt on holidays 2020, the Ganesh Chaturthi is segregated as Restricted Holiday list. 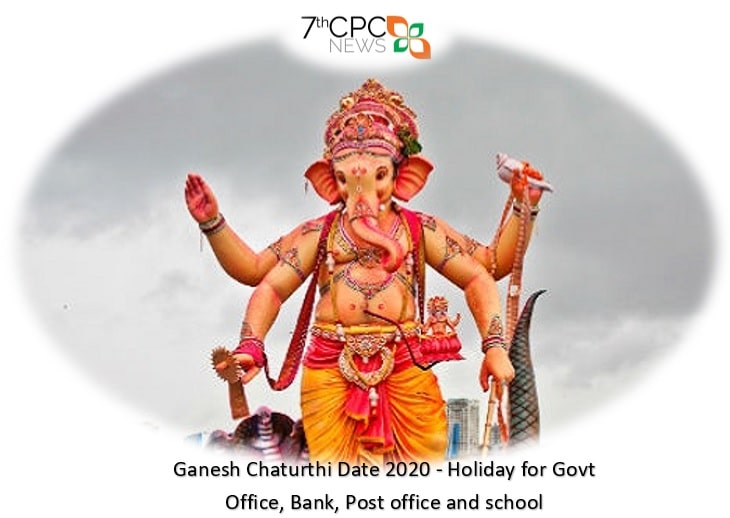 Ganesh Chaturthi (Vinayaka Chaturthi) is a grand devotional festival of God Ganesha celebrated by Hindu community in all over India. One of the unique identity of this festival is make a statue of God Ganesha with mud.

Deity Ganesha is the younger son of Lord Shiva

Ganesh Chaturthi or Vinayaka Chaturthi is celebrated pompously for ten days in India on account of the birth of Lord Ganpati. Deity Ganesha is the younger son of Lord Shiva and Goddess Parvati, the first son being Lord Muruga or Kartikeya. Before launching a new business or starting a new endeavour, it is a custom to invoke the blessings of Pillayar, for it is believed that lord helps throughout the venture to take right decisions to success.

Why Ganesh Chaturthi is celebrated?

During this festival, worshippers gather in public and get an enormous idol of Lord Ganapati and individual devotees get clay idols of Lord Vinayaga for their respective homes as well. People offer their prayers and celebrate for ten-long-days and on the last day, the idol is immersed in the water. In public, people march towards a beach or any large water body joyously with loud music procession and chant “Ganpati bappa morya”, to bid farewell to the beloved Ganesha.

Is Vinayagar Chaturthi a Public Holiday?

Vinayagar Chaturthi is not a National Holiday in India. It is a public holiday in most of the region of India. The festival is celebrated with high devotion and fanfare in the states of Maharashtra, Andhra Pradesh, Telengana, Karnataka and Gujarat.