You are here: Home / BPMS / AIDEF, INDWF, BPMS demand to Withdraw the Arbitrary Decision of Corporatization of OFB 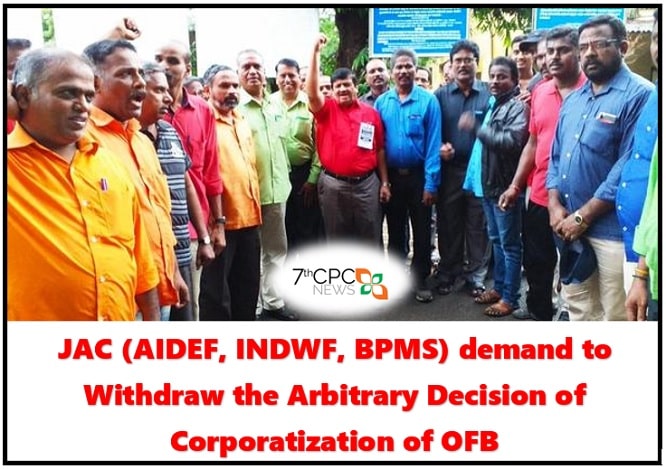 SUBJECT: DECISION OF THE GOVERNMENT TO CORPORATISE THE 219 YRS, OLD STATE OWNED INDIAN ORDNANCE FACTORIES – BEACH OF TRUST AND AGREEMENT WITH THE RECOGNISED EMPLOYEES FEDERATIONS

Respected Sir,
The 82 thousand Defence Civilian Employees working in the 41 Indian Ordnance Factories and its Headquarters formation are very much shocked, disturbed and upset over the arbitrary decision of the Government announced by the Hon’ble Finance Minister in her presentation of details of the 4th Tranche of the Rs. 20 Lakh Crore financial relief to meet the COVID-19 economic crisis under “Atmanirbhar Bharat Abiyan”. We fail to understand how the Corporatisation of Ordnance Factories have become a part of the COVID-19 Relief Package.

Sir, you will appreciate that there are wirtten agreements in the past with the Recognised Employees Federations and Government of India that Ordnance Factories will not be corporatized. All these agreements are being totally ignored and blatantly violated. When the Government has brought the issue of Corporatisation of Ordnance Factories in its 100 days Agenda last year, the three Recognised Federations and the Trade Unions of Ordnance Factory Employees issued a Notice of Strike for observing one month strike demanding to withdraw the decision of the Government Since there was no negotiation and settlement, the strike commenced in the month of Aug. 2019 and in the midst of the Strike based on the direction of the Chief Labour Commissioner, the then Secretary(DP) held series of discussion with the Federation and an agreement was reached that the Government has not yet taken any decision of Corporatising the Ordnance Factories and that a High Level Official Committee will be constituted by the Government to address the concerns of the Federations in this regard. Based on this agreement the strike was deferred. Subsequently a High Level Official Committee (HLOC) was constituted with the then Addl. Secretary (DP) as Chairman. Even though the Federations were not in agreement with the Terms of Reference given to the Committee, we cooperated with the Committee. Two meetings of the Committee were held and there after no meeting was held with the Federations. We are not aware whether the Committee has submitted its report or not. In case the Committee has submitted the report to the Government we have not been given the copy of the same. In the mean time, the pandemic danger of spread of COVID-19 Virus came as a major threat to the country and country went for a National lockdown..

During this COVID-19 crisis, the Government realized the shortage of PPEs to protect the frontline warriors in the battle of COVID-19 Virus Viz., the Doctors, Nurses & Hospital Staff & Sanitary workers. When the country was in need of these items urgently. It is the devoted and committed workforce of the Ordnance Factories who accepted the challenge and risking not only their life, but also their family members, attended the Factory regularly and worked day and night, when all the Government employees were asked to work from home and within a short period produced all the PPEs such as Medical coverall suit, Medical & Non-Medical Mask, Sanitizers, Hospital Isolation Medical Tent, etc. Apart from this the Ordnance Factories also developed and got NABL Accreditation Certificate for the Blood Penetration Test Equipment. All these activities of the Ordnance Factories were appreciated by the Hon’ble RM on several occasions.

The Government of India instead of recognizing the services of the employees who are basically Central Government Employees have hitted on their stomach by converting them as Employees of a Corporation, drastically changing their service conditions and appointment order. A democratically elected Government cannot be so much insensitive and thankless. When the negotiations with the Federations on a Strike notice was pending with the Government in a democracy by ignoring the concerned Trade Unions and arbitrarily deciding to convert the Ordnance Factories the oldest Industrial setup in our country and listing it in the Share Market is not at all acceptable. We are not in a position to believe that how the Government take advantage of the COVID-19 lockdown situation and in the name of giving economic relief to the affected people, making a policy announcement to convert a Government Department in to a Corporation and changing the service conditions of the 82 Thousand Employees. This is nothing but a breach of trust and back stabbing. The decision is taken in such a manner, reminding the work force the emergency days of 1976.

Your decision is arbitrary, illegal, unfair, undemocratic and unjustified. The 82 thousand workfoce of the Indian Ordnance Factories out right rejects the decision of the Government and take this opportunity to appeal to your honour to put on hold this decision of Corporatisation of Ordnance Factories and to start discussions with the Federations after normalcy is restored in the country. We are confident that the Government will consider the above facts in its true spirit and also that good sense will prevail with the decision makers and a positive decision will be taken in this regard by the Government.

In case the Government is not conceding to our request then the 82 thousand employees will be left with no other option than to commence an Indefinite Strike apart from other Trade Unions actions in the coming days.

Awaiting for your earlier and favourable decision please.
Thanking you,

Defence Employees 30 Days Strike started – Joint Press Release on 20.8.2019 Struggle Committee of Defence Civilian Employees to Save Defence Industry Corporatisation of Ordnance Factories – Still the cloud is not clear… Boycott of Lunch on 01.08.2017 by all Ordnance Factories affiliated unions of INDWF Joint Action Programme (AIDEF/INDWF/BPMS) in Defence Establishments – BPMS Joint Memorandum Submitted to Defence Minister on 12.1.2018 – INDWF Decisions taken in the Joint Meeting of the three recognized Federations AIDEF, INDWF & BPMS CONFEDERATION CALLS FOR PROTEST AGAINST THE ARBITRARY AND UNILATERAL DECISION OF THE GOVERNMENT No Corporatization of Ordnance Factories: Defence Minister Assured BPMS