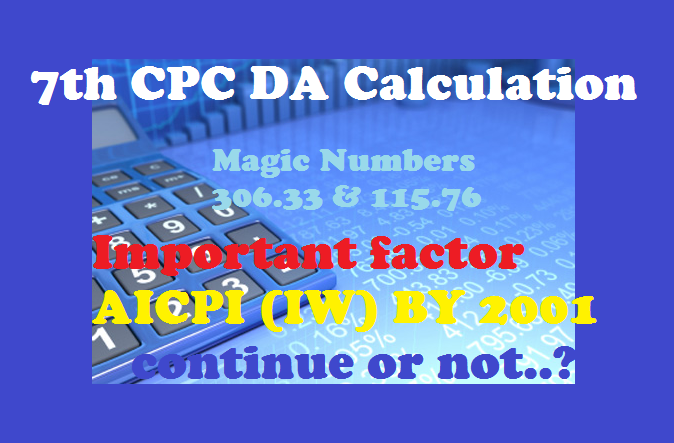 Dearness Allowance is one of the important issues that the Pay Commission deals with.

The calculation method that was recommended by the 6th Pay Commission was radically different from the ones suggested by all the previous Pay Commissions. Dearness Allowance, which was increasing by 1 or 2% until the 5th Pay Commission suddenly shot up to the peak of double-digit numbers.

Will the 7th CPC introduce a new CPI (IW)? Or will it bring about changes in the Reference Base Index?

This is something that everybody wants to know.

5th CPC calculation method is given below…

The Fifth Pay Commission had recommended that DA should be converted into DP each time the CPI increased by 50% over the base index. The Government merged 50% of DA with the
basic pay w.e.f. 1-4-2004. The formula for calculation of DA for the period from 1-7-2004 is:

6th CPC calculation method is given below…

7th CPC DA Calculation – Future computation of DA and adoption base index figure to Revised Minimum Wage DA Calculation Sheet with Inputs of CPI(IW) Base Year 2001=100 AICPIN Table from 2016 – CPI(IW) Base 2001=100 Dearness Allowance Calculation in 7th CPC Gazette Notification Should the Grade Pay structure continue in the 7th CPC too? Expected Date for Submission of 7th Pay Commission Report and its important recommendations- Sources Yearly Increment Calculation – Will the 7th CPC continue the same formula or it brings any changes in to it…! Expected DA Calculation – Fitment Factor of 7th CPC Did you know how the 6th CPC Multiplication Factor of 1.86 was derived?