How to calculate minimum pay of Rs.18000 in 7th CPC Report

“After considering all relevant factors the Commission is of the view that the minimum pay in government recommended at ₹18,000 per month, w.e.f. 01.01.2016, is fair and reasonable and one which, along with other allowances and facilities, would ensure a decent standard of living for the lowest ranked employee in the Central Government.”

The real pay in government is protected by providing Dearness Allowance (DA), which is that percentage of pay by which the CPI (IW)16 increases over a fixed base value.

Consequently the absolute amount of DA keeps on growing with every point increase in CPI (IW). On the other hand the real value of the industrial minimum wage is protected by providing Variable Dearness Allowance (VDA), which is a fixed amount of money given per point increase in CPI (IW) as notified by the Chief Labour Commissioner (central sphere) from time to time. Consequently, over a period of time, the minimum pay + DA in government becomes larger than the minimum wage + VDA in the private sector even though the basic minimum wage in both the sectors is calculated on the basis of the 15th ILC norms. As on 01.01.2015 the minimum pay in government was ₹14,910 whereas minimum wage for a skilled worker was in the range of ₹9,000–₹11,000 per month.

Besides DA, government provides house rent, transport, location and function specific allowances besides Leave Travel Allowance (LTA) which, along with the basic pay, constitute the gross pay of a government employee. If one were to only take HRA at 30 percent of the basic pay and transport allowance at ₹400+DA, as are admissible in A1/A class cities, together with educational allowances for two children at the rate of ₹1,500 per month, the gross pay further increases to ₹20,870 (20870 = 14910 +2100+860+3000) as on 01.01.2015. In addition government gives a host of other benefits that can be measured under the CTG (Cost to Government of an employee) concept. From these numbers it is clear that benefits given to the lowest ranked government employees, whether monetized or not, are significantly higher than the minimum basic pay and also much higher than the emoluments of skilled industrial workers.

To obtain a comparative picture of the salaries paid in the government with that in the private sector enterprises the Commission engaged the Indian Institute of Management, Ahmedabad to conduct a study. According to the study the total emoluments of a General Helper, who is the lowest ranked employee in the government is ₹22,579, more than two times the emoluments of a General Helper in the private sector organizations surveyed at ₹8,000-₹9,500. 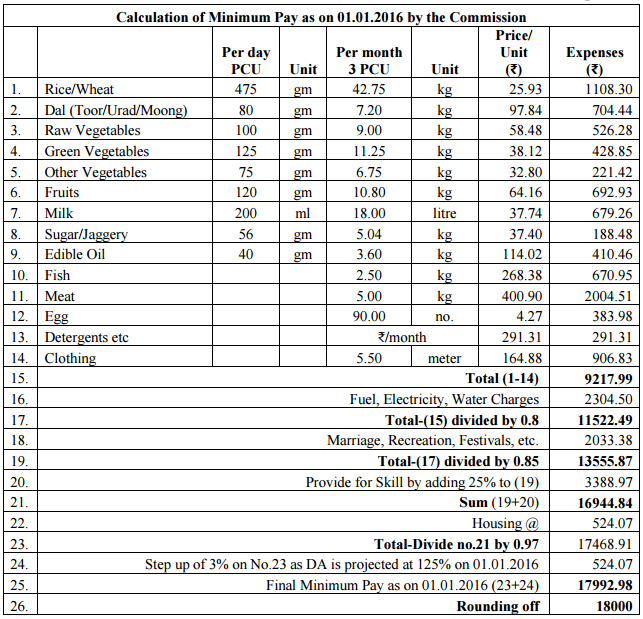