Female Employees Having Child by Surrogacy to Get Maternity Leave 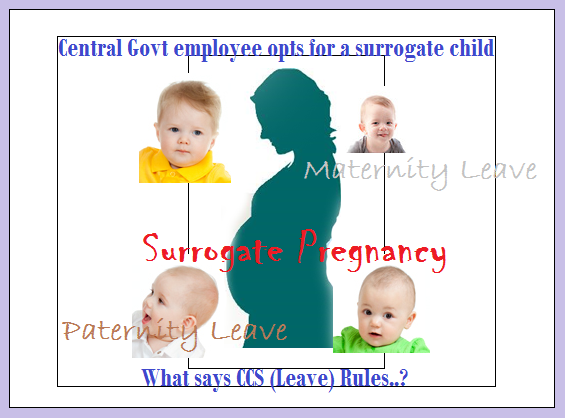 Let’s see what the Indian medical Research Council has to say about couples who choose to have babies through surrogate mothers.

A child born through surrogacy must be adopted by the genetic (biological) parents unless they can establish through genetic (DNA) fingerprinting (of which the records will be maintained in the clinic) that the child is theirs.Guidelines for ART Clinics in India ICMR/NAMS

Surrogacy by assisted conception should normally be considered only for patients for whom it would be physically or medically impossible/undesirable to carry a baby to term.

Payments to surrogate mothers should cover all genuine expenses associated with the pregnancy. Documentary evidence of the financial arrangement for surrogacy must be available. The ART centre should not be involved in this monetary aspect.

Advertisements regarding surrogacy should not be made by the ART clinic. The responsibility of finding a surrogate mother, through advertisement or otherwise, should rest with the couple, or a semen bank.

A surrogate mother should not be over 45 years of age. Before accepting a woman as a possible surrogate for a particular couple’s child, the ART clinic must ensure (and put on record) that the woman satisfies all the testable criteria to go through a successful full-term pregnancy.

A relative, a known person, as well as a person unknown to the couple may act as a surrogate mother for the couple. In the case of a relative acting as a surrogate, the relative should belong to the same generation as the women desiring the surrogate.

A prospective surrogate mother must be tested for HIV and shown to be seronegative for this virus just before embryo transfer. She must also provide a written certificate that (a) she has not had a drug intravenously administered into her through a shared syringe, (b) she has not undergone blood transfusion; and (c) she and her husband (to the best of her/his knowledge) has had no extramarital relationship in the last six months.

(This is to ensure that the person would not come up with symptoms of HIV infection during the period of surrogacy.) The prospective surrogate mother must also declare that she will not use drugs intravenously, and not undergo blood transfusion excepting of blood obtained through a certified blood bank.

No woman may act as a surrogate more then thrice in her lifetime.

No.13018/6/2013 -Estt.(L)
Government of India
Ministry of Personnel, Public Grievances and Pensions
Department of Personnel & Training

2. All Ministries/Departments are advised to give wide publicity of its contents to the concerned officers.

3. This issues with the approval of Secretary (P).

sd/-
(Sandeep Saxena)
Under Secretary to the Govt. of India

12.4 Rule 43, which makes provision for maternity, for the sake of convenience, is extracted herein below:

(1) A female Government servant (including an apprentice) with less than two surviving children may be granted maternity leave by an authority competent to grant leave for a period of (180 day’s) from the date of its commencement.

(3) Maternity leave not exceeding 45 days may also be granted to a female Government servant (irrespective of the number of surviving children) during the entire service of that female Government in case of miscarriage including abortion on production of medical certificate as laid down in Rule 19: ‘Provided that the maternity leave granted and availed of before the commencement of the CCS(Leave) Amendment Rules, 1995, shall not be taken into account for the purpose of this sub-rule’.

(5) Maternity leave shall not be debited against the leave account…”