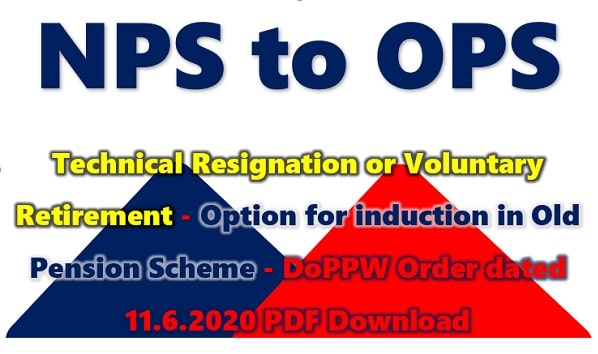 No.28/30/2004-P&PW (B)
Government of India
Ministry of Personnel, Public Grievances and Pension
Department of Pension and Pensioners’ Welfare

Subject:– Mobility of personnel amongst Central /State & Autonomous Bodies while working under Pensionable establishments – regarding.

The undersigned is directed to say that the New Pension Scheme (now called as National Pension System) was introduced vide Department of Economic Affairs’ notification No.5/7/2003-ECB.PR dated 22.12.2003. It was provided that NPS would be mandatory for all new recruits to the Central Government service from 1st of January 2004 except the Armed Forces.

2. In this Department’s O.M. of even number dated 26.7.2005, it was provided that all employees who joined Central Government service or in the service of an autonomous body set up by the Central Government before 1.1.2004 and who were governed by old pension scheme under the Central Civil Service (Pension) Rules, 1972 will continue to be governed by the same pension scheme / rules and will count their past service if they take up new appointment in another Ministry / Department of the Central Government or a Central Autonomous Body covered by the CCS (Pension) Rules on or after 1.1.2004, subject to their satisfying the conditions laid down in Para 4 of DP&AR’s O.M. No.28/10/1984-PU dated 29.8.1984.

6. Such option may be exercised within 3 months of issue of this O.M. Such employees who are appointed under NPS during 1.1.2004 to 28.10.2009 and are eligible to exercise option in terms of para 5 above but do not exercise the option within the stipulated period will continue to be covered by the provisions of National Pension System. Those employees who joined during 1.1.2004 to 28.10.2009 and have already been given the benefit of CCS(Pension) Rules in terms of O.M. dated 28.10.2009, will continue to be governed by those rules.

8. In some cases, due to non-availability of benefit of counting of past services under the old pension system during 01.01.2004 to 28.10.2009, the employees of State Government/ State Autonomous bodies etc. may have been compelled to take voluntary retirement before joining pensionable Central Government Department/ Central Autonomous bodies after 01.01.2004 but before 28.10.2009. It has been decided that ‘voluntary retirement’ of such employees may be treated as ‘technical resignation’ and the benefit of provisions of para 5 to para 7 above may also be extended to them subject to fulfillment of all other conditions for counting of service.

8.1 The forwarding the application through proper channel for the post they had joined after getting voluntary retirement is a pre- requisite for considering it as technical resignation.

8.2 The provisions of this O.M. is mandatory in all such cases.

9. The modalities of accounting of the NPS accumulation would be as under:

10. All Ministries / Departments are requested to bring the contents of these orders to the notice of Controller of Accounts/Pay and Accounts Officers and Attached, Subordinate Offices and Autonomous bodies under them.

12. In their application to the employees of Indian Audit and Accounts Department, these orders are issued after consultation with Comptroller and Auditor General of India, as mandated under Article 148(5) of the Constitution.

sd/-
(Ruchir Mittal)
Deputy Secretary to the Government of India