You are here: Home / National Pension Scheme / GConnect has published an article titled, ‘NPS is far beneficial than Government Pension’ 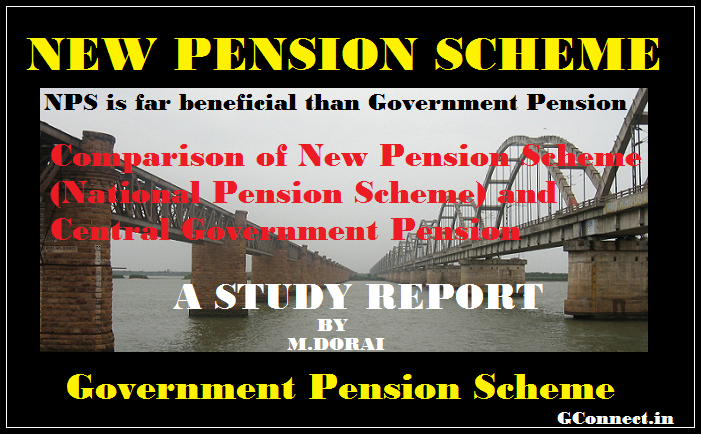 The article that was published yesterday seeks to answer critics who claim that the new pension scheme is outright bad. GConnect has made it very clear that the opinions expressed in the article belong to its writer, Mr. Dorai, Deputy Director, ESIC Model Hospital and that the website doesn’t necessarily subscribe to them.

The ‘study report,’ that compares the salient features of the old(Central Government Pension Scheme) and new pension schemes, is bound to create controversies.

While various Central Govt employees associations and federations are putting pressure on the Government to withdraw the new pension scheme and enforce the previous one, we believe that this article is going to make a huge impact.

The report gives as an example, the case of an employee who joins the Central Government employment as a Upper Division Clerk(UDC) in 2014 and retires after 35 years service, in 2049. The report gives a comparative study of how the pension fund grow each of these 35 years. The study also assumes a regular dearness allowance of 6% every six months, and an annual increment of 3%.

The study also assumes that, at an interval of 10 years, the employee gets 3 promotions during his service tenure. Most importantly, it is assumed that matching the employee’s contribution, the Government’s contribution too would witness an 8.7% increase per annum.

It is stated that the monthly pension will be a minimum Rs. 83,306. In addition to this, at the age of 70, the employee gets the remaining 40% back. The article strongly claims that this money could be the gift that the person leaves behind for his future generation.

The article’s highlight feature is the claim that if the Pay Commission recommendations are taken into account, the amount could be much higher and that the UDC could get as much as Rs. 5 crores at the time of retirement.

According to the old Govt pension scheme, the employee’s monthly pension amount would be Rs. 1,00,934, and after his demise, his spouse would get Rs. 10,317 plus Dearness Allowance. After his/her death, there are no more benefits for the family.

The article is indirectly stating that the absence of gratuity and other such benefits is not a huge issue. According to the old Govt pension scheme, at the time of retirement, the employee would make only Rs. 38,32,550, which is Gratuity (16.5 months) + EL Encashment + Commutation.

While discussing the General Provident Fund (GPF), the article assumes that since nobody leaves anything much in this fund, its overall impact on the total pension fund would be minimal.

The writer concludes his article by declaring that those who oppose the new pension scheme lack intelligence.