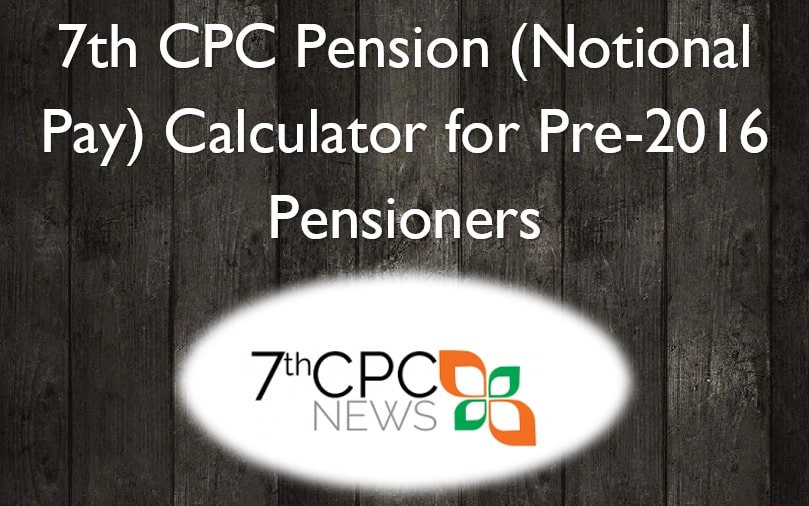 [Updated July 2017: This calculator has modified as per Concordance Tables. Concordance Tables for fixation of notional pay and pension / family pension of employees who retired/died in various grades during the 4th, 5th and 6th Pay Commission periods have been prepared and published by the Department of Pension & Pensioners’ Welfare on 6th July, 2017.]

7th CPC Pension (Notional Pay) Calculator for Pre-2016 Pensioners and Family Pensioners as per the Notification issued by the Department of Pension and Pensioners Welfare on 12th May, 2017.

[Note: All figures are indicative]

How to use this calculator:

We provided here a simple online calculator as the Notification issued by the Ministry of Personnel, PG & Pensioners on 12.5.2017 for all Civil Pre-2016 Pensioners and Family Pensioners. This calculator gives revised pension as on 1.1.2016 under new formulation recommended by the Pension Committee.

First select your regime of pay commission and you have to enter your last pay drawn in the ‘Pay on Retirement’ field. And third one is ‘Scale of Pay’ at the time of retirement.

Calculator gives immediately gives an approximate value of pension amount as on 1.1.2016.