Check Your Revised Pension / Family Pension as on 1.7.2017 as per the order

PROCEEDINGS OF THE GOVERNMENT OF KARNATAKA

2.Government have accepted the recommendations of the 6th State Pay Commission in G.O.No. FD 06 SRP 2018 dtd:01.03.2018 and are now pleased to issue the following orders regarding revision of pensionary benefits.

4.1 The ceiling on the maximum amount of various kinds of Pension mentioned in para 3 above shall be fixed at Rs.75,3001- per month.

4.2 The quantum of adhoc pension that may be sanctioned under Rule 210 of the Karnataka Civil Services Rules, shall not, save in the most exceptional circumstances, exceed Rs.8,500/- per month.

6.1 In the case of a Government Servant who has completed not less than ten six monthly periods of qualifying service the amount of retirement gratuity payable under the Karnataka Civil Service Rules shall be equal to 1/4th of the emoluments for each completed six monthly period of qualifying service, subject to a maximum of 16 1/2 times the emoluments. The amount of retirement gratuity thus calculated shall be subject to a maximum of Rs.20.00 lakhs to the Government Servants who retire on or after 01.04.2018.

6.2. In the event of death of a Government Servant while in the service on or after 01..04.2018 the death gratuity shall be admissible under Karnataka Civil Services Rules at the following rates. 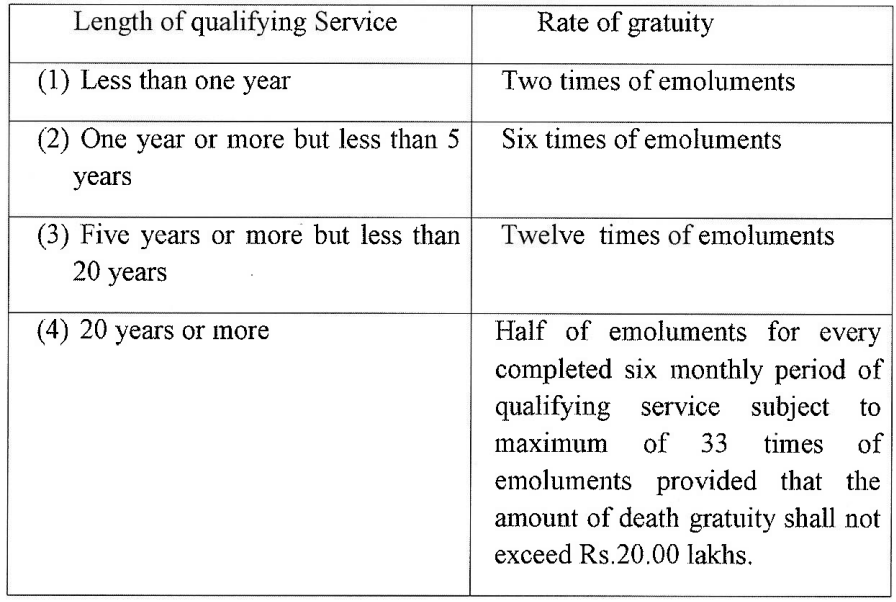 7.1 The rates of family pension admissible as per Karnataka Government Servants (Family Pension) Rules, 2002 shall be 30% of the emoluments subject to minimum of Rs.8,500/- and maximum of Rs.45,180/- per month in respect of Government Servants who dies while in. service or retires on or after 01.04.2018.

7.2 In the event of death on or after 01.04. 2018 of both father and mother who are Government Servants, the family pension payable to minor children under the Karnataka Government Servants (Family Pension) Rules, 2002 shall be subject to a maximum of Rs.45,1801- per month.

The term emoluments for purpose of calculating various retirement and death benefits and family pension shall mean the basic pay drawn by a Government Servant in the scale of pay applicable to the post held by him on the date of retirement/ death shall also include:

9.2 Where family pension is sanctioned to two or more members of a family, increase under these orders shall be determined with reference to the share of each recipient. The total family pension should be consolidated as per the above guidelines. Wherever all the shares are being drawn in the same Treasury, the consolidation and determination of shares shall be calculated and arrived at by the Treasury Officer himself Wherever those shares are being drawn in different treasuries, the Accountant General should be consulted in the matter.

10. The increase in pension or family pension sanctioned in this order shall be subject to the following conditions

10.2 In case of death of a pensioner who was entitled to the increase in pension, arrears, if any, shall be paid to the persons entitled to receive family pension or to their legal heirs and for such payment prescribed in the Karnataka Treasury Code shall be followed.

11.The existing provisions in the Karnataka Civil Services Rules (Extraordinary Pension) Rules, 2003, Karnataka Government Servants (Family Pension) Rules, 2002 and other orders issued on the subject from time to time stand modified to the above extent. The other rules, conditions and orders regulating pension, gratuity, family pension and commutation of pension shall continue to apply. Necessary amendments to the Karnataka Civil Services Rules and other Rules will be issued separately.

12. Restoration of commuted portion of Pension

In th.e case of Government Servant who commutes a portion of a pension under Rule 376 of the Karnataka Civil Services Rules, the commuted portion of his pension shall be restored after 15 years from the date of commutation.

13.These orders are not applicable to the retired State Government Employees on. UGC, AICTE and ICAR scales of pay and retired Judicial Officers on NTPC scales of pay. Separate Orders shall be issued in. this regard.

14.These orders are not applicable to the Government Servants who are appointed under New Defined Contributory Pension Scheme on or after 01.04.2006.

The increase on account of revision of pension/family pension shall be payable in. cash from 0:1.04. 2018. In cases where a Government servant has retired from service or died while in service or ceased to be in service during the period between 01..07.2017 and 31.03.201.8, his pay fixed notionally in the revised scale of pay shall be taken into account for th.e purpose of calculation. of pension/family pension. The monetary benefit shall, however, accrue to the retired Government servant or the beneficiary of the deceased Government servant with effect from 01.04.2018.

The revised basic pension and family pension admissible to the Government Servants who have retired or died while in service prior to 01.07.2017 is shown in the Annexure to this Order.

16. Any difficulty encountered in the implementation of this order may be referred to Deputy Secretary to Government (Pension) in Finance department for examination and necessary remedial action.

By order and in the name of the
Governor of Karnataka,