No.3(2)/2017/D(Civ-II)
Government of India
Ministry of Defence
(Department of Defence)

The Chief of Defence Staff,
Ministry of Defence,
New Delhi-110011

The Chief of Army Staff,
Integrated HQrs of Ministry of Defence(Army),
New Delhi-110011

The Chief of Naval Staff
Integrated HQrs of Ministry of Defence(Navy),
New Delhi-110011.

I am directed to refer to this Ministry’s letter No. 3/3/2009/D(Civ-11) dated 10.11.2010 on the above mentioned subject and to state that in view of the revision of pay AICTE pay scales in the Technical Institutions as notified vide Ministry of Human Resource Development’s (MHRD) letter No. 1-37/2016-TS. ll dated 18.01.2019 read with their letters of even number dated 29.01.2019 and All India Council for Technical Education’s (AICTE) Notification No. 61-1/RIFD/7th CPC/2016-17 dated 01.03.2019, the President is pleased to further revise the pay scales of Civilian Professorial Staff of the training institutions as mentioned in the subject of the letter. The revised pay scales and other provisions shall be as per the following paragraphs.

2. Designation: –
There shall be only three designations in respect of Civilian Professorial Staff, namely Assistant Professors, Associate Professors and Professors.

3. Revised Pay: –
(I) Pay Fixation Method:
The revised pay structure for different categories of Civilian Professoria l Staff is based on the following: –

(a) The formula followed by the 7th CPC is followed in the academic pay structure, movig from the concept of Pay Band and Academic Grade Pay to that of Academic Levels and Cells.

(c) Each cell in an academic level is at 3% higher than the previous cell in that level.

(e) The entry pay for each level is as follows:

(f) The Pay Matrix based on the above propositions on Academic Levels, Cell and Entry Pay is at Annexure.

In cases where in revision of pay, the pay of Government Servants drawing pay at two or more stages in pre-revised Pay Band and Grade Pay or scale, as the case may be, gets fixed at same Cell in the applicable Level in the new Pay Matrix, one additional increment shall be given for every two stages bunched and the pay of Government Servant drawing higher pay in the pre-revised structure shall be fixed at the next vertical Cell in the applicable Level as per Ministry of Finance, Department of Expenditure OM No. 1-6/2016-IC dated 07.09.2016 and subsequent clarification issued vide DoE’s OM No. 1-6/2016-IC/E-lllA dated 07.02.2019.

(5) Promotion:– When an individual gets a promotion, his new pay on promotion would be fixed in the Pay Matrix as follows:

On promotion, he would be given a notional increment in his existing Academic Level of Pay, by moving him to next higher cell at that level. The pay shown in this cell would now be located in the new Academic level corresponding to the post to which he has been promoted. If a cell identical with that pay is available in the new level, that cell shall be the new pay; otherwise the next higher cell in that level shall be the new pay of the employee. If the pay arrived at in this manner is less than the first cell in the new level, then the pay shall be fixed at the first cell of that level.

(6) Career Advancement Scheme(CAS):– Stages of promotion under the CAS of incumbent and newly-appointed Assistant Professors/Associate Professors/Professors shall be as per the eligibility and CAS Promotion Criteria prescribed in para 2.9 and para 5.2 of AICTE Notification No. 61-1/RIFD/7th CPC/2016-17 dated 01.03.2019.

(8) Service conditions and other allowances as applicable to Central Govt servants:– For all matters of service conditions and other allowances other than those mentioned in the foregoing paragraphs, namely pay scales, incentives for Research Qualifications and upward movements under CAS, the Civilian Professorial Staff will continue to- be governed by the rules applicable to Defence Civilians in other Defence Establishments.

(9) Date of implementation of revised pay and allowances and payment of arrears:

(i) The revised Pay and revised rates of Dearness Allowance under this scheme shall be effective from 01.01.2016.

(iii) Payment of arrears shall be made during the financial yea r e. 2020-2 1, after deduction of admissible income tax.

(iv) An undertaking shall be taken from every beneficiary under this scheme to the effect that any excess payment made on account of incorrect fixation of pay in the revised Pay Level or grant of inappropriate Pay Level and Pay Cells or any other excess payment made shall be adjusted against the future payments due or otherwise to the beneficiary.

(10) Recruitment Rules:– Appointment/recruitment to all posts of Civilian Professorial Staff will be carried out as per the qualifications prescribed under the AICTE Scheme for the respective posts. The concerned Headquarters/Directorates may review the RRs to be in line wit h AICTE scheme.

(11) Further modifications/ amendments, if any to the MHRD scheme of revision of pay of teachers as per 7th CPC issued vide MHRD letter No. 1-37/2016-TS.ll dated 01.2019 read with their letter of even number dated 29. 01.2019 and AICTE Regulations notified vide AICTE Notification No. 61-1/RIFD/7th CPC/20 16-17 dated 01.03.2019 shall be applicable automatically to the teachers/Civilian Professorial Staff of the above mentioned Defence Technical Colleges.

(12) Anomalies, if any, in the implementation of this Scheme may be brought to the notice of the concerned Headquarters/Directorates for clarification/decision of the Central Government.

(13) Any clarifications on points other than pay and allowances will be provided by the concerned Division(s) dealing with the subject(s).

(Vimala Vikram)
Under Secretary to the Govt. of India 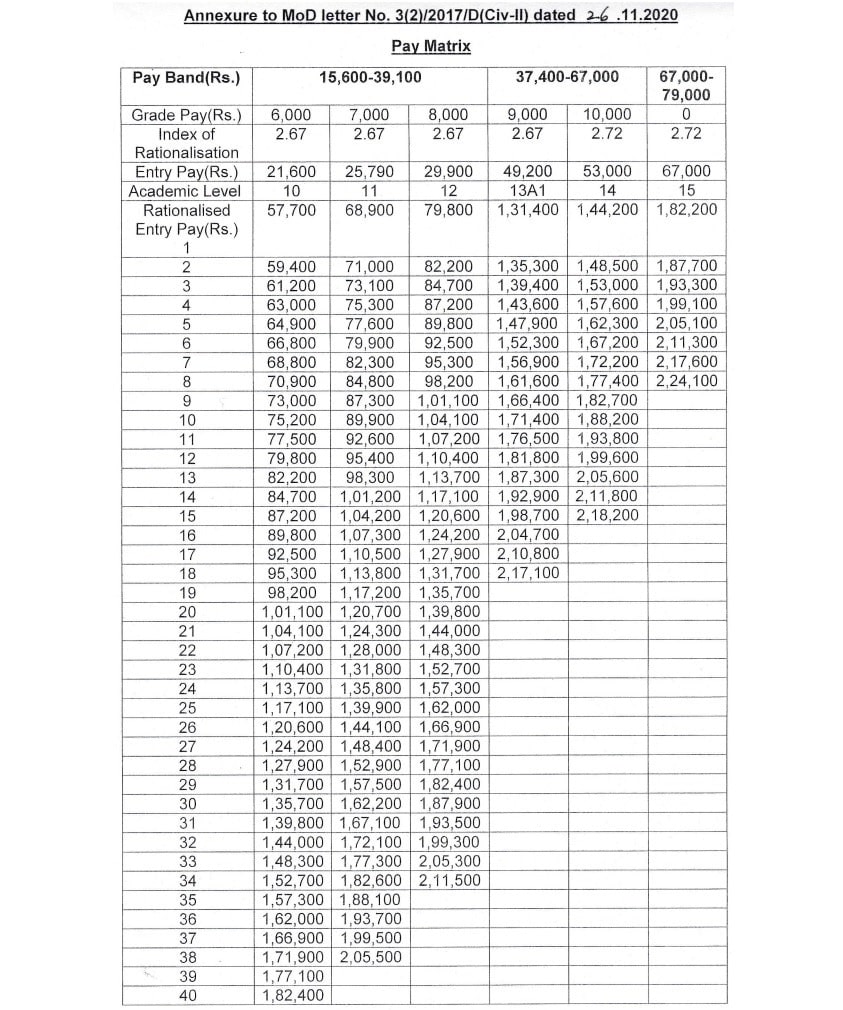