You are here: Home / 7th Central Pay Commission / NCCPA appeal to release 7% of Dearness Relief with Arrears to Pensioners

National Coordination Committee of Pensioners Association (NCCPA) appeals to release the 7% Dearness Relief and makeover the payment of the Arrears to the Pensioners without any further loss of time. 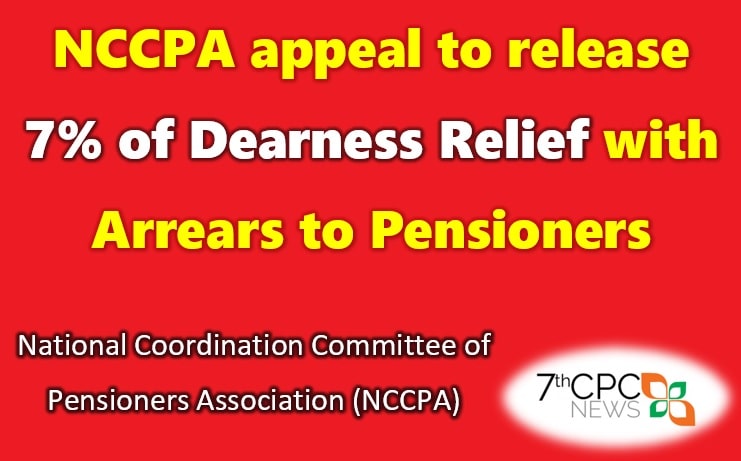 The National Secretariat of NCCPA met though video conferencing on 15th June, 2020. Com. Shiv Gopal Misra, President chaired the meeting. Due to some technical reasons, Com. Pavitra Chakraborty and Com. Prabhakaran Nair (both Deputy Secretary Generals) could not join the meeting. The meeting which lasted for more than an hour took note of the following developments.

2. The meeting also briefly discussed the prospects of pursuing the MACP cases in the administrative tribunal. It was decided that in view of the situation obtaining in Delhi due to covid 19 as also at Chennai, the matter might be kept pending for some more time. However, in the meantime the Secretary General may generate a format of application form and place the same on the website. The affiliates might get the application filled in by the interested persons and collect the requisite fees from them so that the case can be filed as and when the courts are open.

2. After discussions, the meting took the following decisions:

(i) The pensioners, wherever possible will join hands with the working employees to take part in the protest actions organized by the united platform of working class as also independently by the CGE organizations.

(ii) to send an appropriately worded resolution to the Prime Minister conveying the feelings and problems of pensioners especially emanating from the denial of DR.

(iii) to advise each affiliate and the pensioner member to send a brief e mail communication to the Prime Minister.

(iv) the affiliates and the members will be advised to ensure that the e mails are sent before the end of July, 2020.

(v) On CGHS difficulties, the President and Secretary General will take up the matter with the Staff Side JCM and prepare common communication as the issues are one and the same for both pensioners and working employees.

4. The meeting decided that the National Executive of NCCPA must meet in July through video conferencing. The Secretary General was asked to take requisite steps.

5. All the Sectt. members and the Chief Executives (Secretary General / General Secretary) of affiliates are requested to communicate their e-mail address to Com. K.Ragavendran, Deputy Secretary General NCCPA. A link will be emailed in that email from [email protected] and by clicking the link you all can join the video conference.

6. In the meantime, a meeting was arranged by the General Secretary of TUI (P&R) in which besides the undersigned, Com. K.Ragavendran and Com. K.G.Jayaraj attended. We are happy to inform you that Com. K.Ragavendran has been elected as the Convenor of the Asian region of TUI . We propose to hold a meeting of the representatives of the pensioners associations in the Asian continent first through video conferencing. Kindly visit the website for knowing the developments in the pensioners’ world.

This meeting of the National Secretariat of NCCPA held through video conferencing painfully takes note of the extremely alarming situation developed in the world due to the Covid 19 corona pandemic.

The meeting pays sorrowful homage to lakhs of people around the world who succumbed to the deadly disease and conveys the heartfelt condolences of the members of NCCPA to the bereaved members of the family of the covid victims.

The meeting takes note of the sacrifice, courage, conviction, dedication and the untiring efforts of the health workers, especially the Doctors, Nurses, Para medical staff both in India and abroad by virtue of which millions escaped from the jaws of death. The meeting specially noted the supreme sacrifice of some of the health workers who laid down their lives for rescuing others.

Besides the health workers, the meeting noted that the law enforcing personnel of the police department, officials of the local bodies, viz. Panchayat, City Corporations and towns, the Government officials from the revenue and other departments, the Asha and Anganawadi workers, the people who formed voluntary organizations; all have worked in unison to control and combat the spread of the deadly disease, given the fact that there exist no preventive and curative medicine. The meeting observed that but for the admirable response of the people at large to the directives of the Government, the lock down would not have been effective at all and they above all deserve the greatest appreciation and admiration.

The meeting also placed on record with pride and satisfaction that the pensioner community and especially those who are members of various affiliates of NCCPA had responded to the call of the Government to donate a day’s salary/pension to the Prime Minister’s public relief fund to provide the much needed financial assistance to the people at large.

The meeting however noted that the pensioner community had felt exasperated over the failure of the Government of India to appreciate their plight caused by the sudden decision taken to bring into effect a complete lock down to combat the spread of the covid virus. Most of them being small income pensioners and family pensioners could not make both ends meet even in the normal circumstances. The lock down and the consequent difficulties were unbearable for them. Being Senior citizen, they had been inflicted with various ailments and other physical debilities. The lock down made their life miserable. No helping hand was extended to them. Contrary to what ought to have been done by the Government to mitigate their difficulties, Government of India chose to deny them even the dearness relief they were entitled to receive from Ist January, 2020.

The meeting felt that the decision of the Government conveyed vide their order in O.M. No.1/1/2020.EII (B) dated 23rd April, 2020 to deny them the dearness relief with effect from 1.1.2020 for another 18months had been the unkindest one ever taken by any Government. The meeting noted that never in the history of the country even on occasions when its very existence had been threatened by external aggression or when it faced the worst financial crisis in 1990, has it resorted to confiscate the meager pension income of senior citizens. The meeting observed that no country in the world had resorted to such a step as has been taken by the Government of India to heap such inhuman burden on senior citizens. Especially in the background of the 20 trillion rupee package, the major beneficiaries of which had been the rich entrepreneurs and multinational corporate establishments, the denial of even the legitimate entitlements of the pensioners, the meeting felt has revealed the sadistic state of mind of people in authority.

The meeting also noted that it was the same disdainful attitude that had been responsible for the permission extended to the oil companies to raise the retail prices of petrol and diesel continuously for 22 days when the crude oil price in the international market had been diminishing, unmindful of the misery and agony of the people. It was the crudest exploitation of a situation pretty well knowing that the people gripped with the fear of the pandemic corona virus would not be able to make any resistance movement possible.

The meeting has, therefore, unequivocally affirms that the order issued on23rd April, 2020 to deny the dearness relief to the pensioners must be rescinded immediately, for besides the agony it inflicts on the pensioner community, it is without legal status for the rules strictly prohibits curtailment of pension entitlements under any circumstances. The Government must appreciate that dearness relief is an integral part of the pension and the Government has no authority either to deny any part of it or even to defer its payment.

The meeting has, therefore, decided to appeal to the Government to immediately release the 7% Dearness relief and make over the payment of the arrears to the pensioners without any further loss of time and direct the Ministry of Finance to rescind the orders cited in so far as it is applicable to the pensioners and dearness relief.

Draft Email communication addressed to the Prime Minister
We/I solicit your kind reference to the resolution adopted by the National Secretariat of the National Coordination Committee of Pensioners Association (NCCPA) , copy of which has already been submitted to the honourable Prime Minister on 4th July, 2020. We/I being an affiliated member association/member request the honourable Prime Minister to kindly direct the Ministry of Finance to rescind the order in O.M.No. 1/1/2020-E.II(B) dated 23rd April, 2020 forthwith and sanction the dearness relief which has become due from 1.1.2020.