You are here: Home / Strike / retirement age of Central Government employees from 60 to 58..? 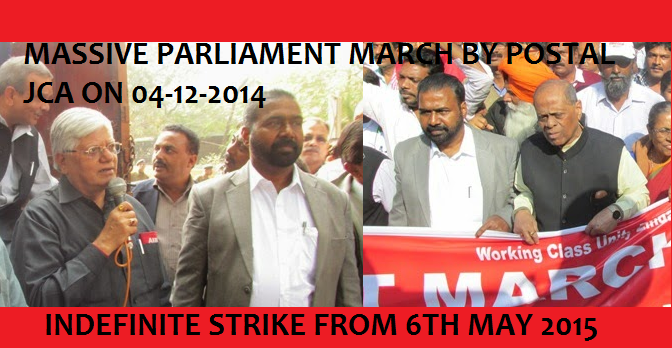 INDEFINITE STRIKE FROM 6TH MAY 2015

About 15000 Postal Employees marched to Parliament today under the banner of Postal Joint Council of Action (NFPE, FNPO, AIPEU-GDS (NFPE) & NUGDS). Employees from all the 22 circles participated in the historic march with colorful banners, flags and caps shouting slogans against the negative attitude of the Government towards the demands of the Postal Employees.

Postal Joint Council of Action declared nationwide indefinite strike from 6th May 2015. If the Government is not ready to settle the demands before that date.

The date of the strike was fixed as 6th May, taking into consideration the fact that the JCM National Council National Convention to be held on 11th December will be declaring series of agitational programmes during the month of February, March and April 2015.