You are here: Home / LTC / Leave Travel Concession for Central Government employees is likely to be extended to cover trips to foreign countries 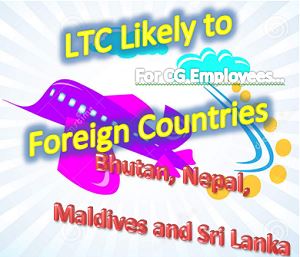 Leave Travel Concession for Central Government employees is likely to be extended to cover trips to foreign countries too. Although these are unconfirmed reports, we are sharing the news reports that have appeared in leading English newspapers recently.

Traveling abroad is a dream for most Indian families. The Centre’s attempts to fulfill this dream are worth appreciating. Although initially the scheme covers only four countries (Bhutan, Nepal, Maldives and Sri Lanka), traveling to a foreign country, with the expenses paid by the Government, is no small accomplishment. Traveling abroad with the entire family is bound to elevate the social status of the employee among his friends and relatives.

Newspapers claim that the decision was influenced by a desire to boost tourism to neighbouring countries after Prime Minister Modi’s trip to the SAARC meeting.

Air travel concession under LTC Scheme to the North East Region was launched by the Centre in 2008 in order to boost tourism to those states. The concession was then extended to cover Jammu and Kashmir. Now, the concession also covers Andaman and Nicobar Islands. The DoPT issued orders on 26.9.2014 that the relaxation to travel by air to NER, J&K and A&N with effect from September 2014.

In the past, All India LTC was granted once every four years to Central Government employees, to travel by train to a selected place and reimburse the ticket expenses. The fact that, from those humble beginnings, it has come this far, is a welcome development.

From general compartment-travels, the concession was upgraded to the air-conditioned class. Then, it was given for air travels. Now, the scheme is all set to cover trips to foreign countries.