You are here: Home / 5 Days Work / Five days a week working in administrative offices of the Central Government 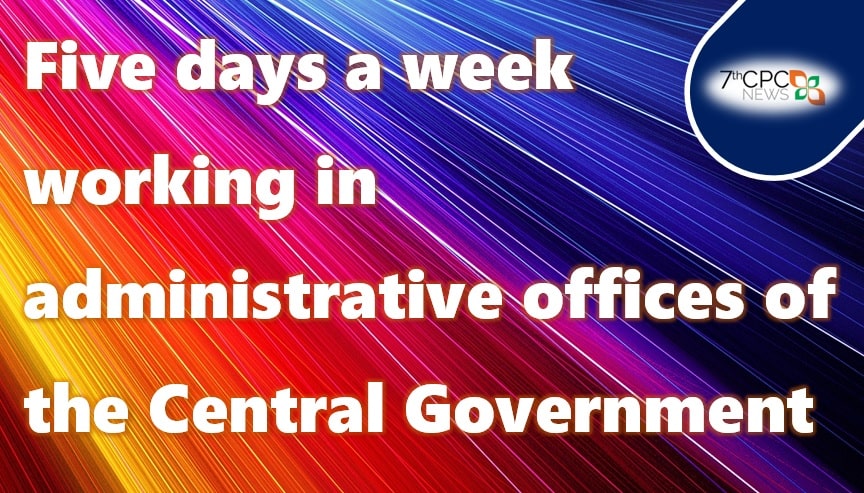 After taking over of new Central Government led by Hon’ble Prime Minister Shri Narendra Modi, there is whispering about reverting back to six days a week in place of the prevalent five days week working in the administrative offices of the Central Government.

In this connection, it would be worthwhile to mention here that five days a week working was introduced way back in the year 1985 after prolonged deliberations at National Council (JCM)’s level when Late Shri Rajiv Gandhi was Hon’ble Prime Minister of India, taking into account various aspects, including energy saving in the form of electricity in these offices. This was, however, done keeping in mind the total number of working hours per week as per the provisions of HOER, which, of course, is statutory provision under the Act.

Staff Side, though hope that the new Central Government would not be inclined to change the existing system of five days a week working, which is beneficial for both the administration and the employees, nevertheless, if need be, this matter be discussed with the Staff Side threadbare.

No. 13/4/85-JCA
Government of India
Department of Personnel & Training

Subject:- Introduction of 5-day-week in the administrative offices of the Government of India.

The Government of India have considered the question of introduction of 5-day week in the administrative offices of the Central Government in the context of improving efficiency in administration. The matter has also been discussed with the Staff side of the National Council of the JCM.

To make up for the closed Saturdays, the working hours per day during the 5 days of the week when the offices are open will be increased by an hour.

2. Accordingly, it has been decided to have the following office timings in the government offices in Delhi/New Delhi:-

3. In so far as administrative offices outside Delhi/New Delhi are concerned, the total working hours would not exceed 7-1/2 hours excluding lunch break, but the office timing may be decided by the Central Government Employees Welfare Coordination Committee (where it exists) or by the Head of Office (where such a Committee does not exist) in consultation with the representatives of the employees.

4. All the Ministries/Departments are requested to bring these instructions to the notice of all organizations/offices under their control for information and compliance.