Select check box to confirm that rules and procedure are read.

After click on submit an OTP will be sent on mobile number given at the time of booking, enter the received OTP and click submit.

After the OTP is validated PNR details will be displayed on the screen.

After verifying the details Click on ‘Cancel Ticket’ for full cancellation. Refund amount due will be displayed on the screen.

An SMS will be sent with PNR and refund details. Sample format: “Your PNR xxxxxxxxxx has been cancelled. Collect refund amt xxxxx from journey commencing station or nearby satellite PRS locations. Ref. Terms & conditions”

For tickets cancelled (including return journey tickets) between 24 hours and upto 4 hours for the confirmed tickets and upto thirty minutes for RAC/waitlisted tickets before the scheduled departure time:

During first two hours of the opening of PRS counters on the next day for the tickets for the trains whose scheduled departure as under:- time is (i) between 1801 hours and 0600 hours. 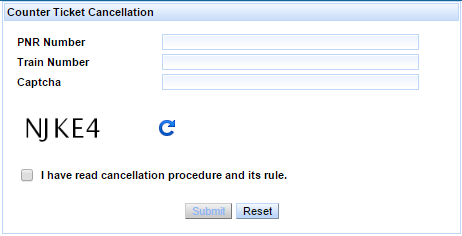 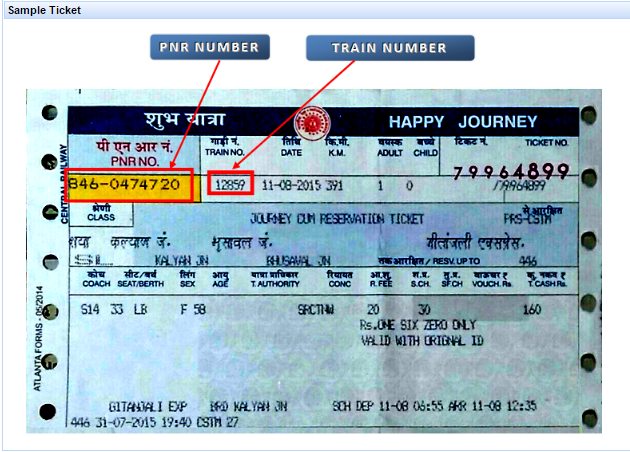 New Rules for Cancellation and Refund of Railway Tickets No Cash Refund for Booked Tickets between 9.11.2016 and 11.11.2016 – Railway Board Orders Railway Ticket Refund of Rs.5000 and above against only PAN, Aadhar and Details of Bank Account – Southern Railway IRCTC Railway Ticket Cancellation Charges and Refund Rules How to Change Passenger name in IRCTC Reserved Ticket? IRCTC plans to reduce the payment transaction time about 1.5 to 2.5 minutes per ticket booking online Procedure for Refund/Cancellation of PRS and UTS tickets Booked through PoS Machine No leakage of email and mobile numbers from user profile data of IRCTC E-ticketing system – IRCTC Cancellation of trains – Information through SMS to passengers