You are here: Home / Pension / Payment of Death Gratuity to a minor – Pensioners Portal Orders

Payment of Death Gratuity to a minor – Pensioners Portal Orders 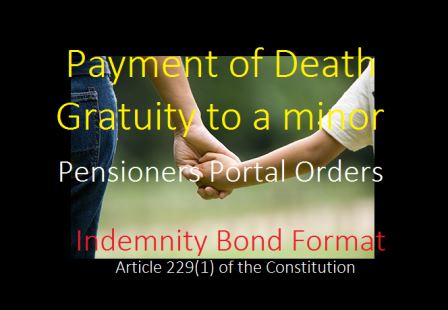 Subject: Payment of Death Gratuity to a minor — regarding

3. It is essential however, that there should be adequate prima facie grounds for making payment as in paragraph 2 above, to the person claiming it. Such ground can exist only if he is shown by a declaration to be a de facto guardian and his bona fides have been ascertained. Even if a guardian has not yet been appointed by the Court, if the minor and his property are in the custody of some person, such person is in law a de facto guardian. The authorities making the payment, should, therefore, require the person who comes forward to claim payment on behalf of the minor, to satisfy themselves by a form that he is in charge of the property of the minor and is looking after it or that, if the minor has no property other than the gratuity, the minor is in his custody and care. The form so to be produced is in addition to the indemnity bond with suitable sureties.

4. The indemnity bond which is required to be produced by a de-facto guardian of minor(s) for payment of retirement/death gratuity to the extent of Rs.1.50 lakh or 20% whichever is less should be executed in the form appended below.

5. It has been decided that the stamp duty payable on the indemnity bond will be borne by the Government. The indemnity bond, should, therefore, be executed on any durable plain paper.

7. In so far as the persons serving in the Indian audit and Accounts Department are concerned, these orders have been issued after consultation with the Comptroller and Auditor General of India.