Subject: Review of Model Calendar for the Departmental Promotion Committees (DPCs) being conducted by the Ministries / Departments.

Reference is drawn to this Department’s instructions on Model calendar for DPCs vide O.M. No.22011/9/98-Estt (D) dated 8th September, 1998. The Model Calendar envisages initiating action in advance of the commencement of the vacancy year so as to have the approved select panels ready before start of the vacancy year and ensure timely promotions of employees.

3. The schedule of Model Calendar for conduct of DPCs in line with the time schedule for completion of APARs so that the panel as approved by the Competent Authority is available before the commencement of the vacancy year has been further examined. It has been decided to reschedule the time frame for the DPCs being conducted by Ministries/Departments themselves as below:-

4. It has been decided to make the aforesaid Model Calendar for DPCs operational with effect from April 1, 2015 in relation to the financial year based vacancy year 2016-17 commencing from April 1, 2016. In the case of calendar year-based vacancy year commencing from January 1, 2016, the Model DPC Calendar will take operational effect from January 1, 2015. These instructions shall, accordingly, be applicable to all such subsequent vacancy years.

5. The success of the Model Calendar depends upon the Ministries/Departments initiating timely action in advance and furnishing the complete proposals to the DPCs with relevant APARs, copy of Service/Recruitment Rules, seniority list, penalty statement and correct vacancy position etc. All Ministries/Departments are, therefore, requested to give these instructions wide circulation and ensure strict compliance so that the desired objectives of convening of DPC meetings/preparation of the approval select panels as per the aforesaid prescribed time frame may be achieved.

6. Model calendar for DPCs conducted by UPSC both for ACC and Non-ACC cases is separately under review. Meanwhile, cadre controlling authorities are advised for timely completion of calculation of vacancy; finalization of Seniority List; collection of information on vigilance clearance status; completion of Penalty statement for last ten years so that the proposal for seeking the date from UPSC for holding DPC may be taken up on completion of APARs including disposal of representations received on entries/grading in ACRs/ APARs. The instructions with regard to JS level officer as designated authority for timely holding of DPCs and requirement of complete proposal as contained in OM No. 22011/1/2011-Estt.(D) dated 25th March,2011 and OM No. 22011/3/2011-Estt.(D) dated 24th March, 2011 are reiterated. 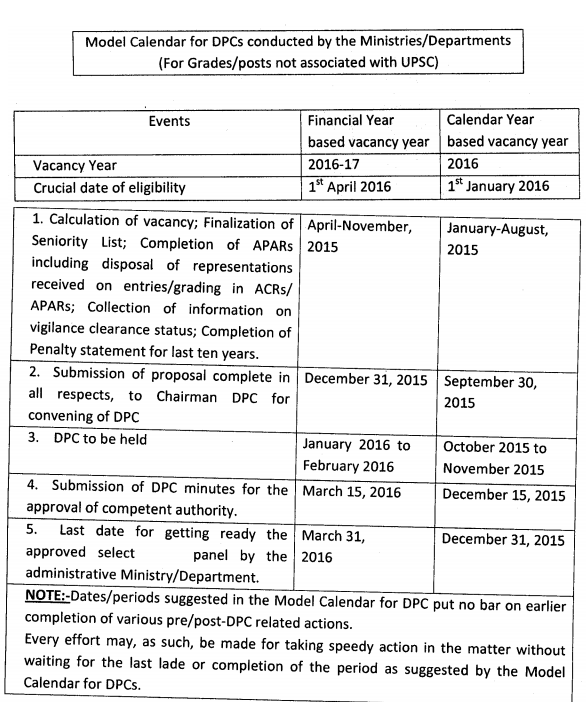