You are here: Home / Pension / Hike in Minimum Pension

(a)whether after meeting recently to consider higher pensions and equity investments, the EPFO the Government is considering a hike in minimum pension from Rs. 1000 to Rs. 2000 a month, costing the Governments Rs. 3000 crore annually;
(b)whether this hike is likely to benefit some 40 lakh subscribers who are getting less than Rs. 1500 per month, out of a total of 60 lakh pensioners under the EPF-95 Scheme; and
(c)whether to fetch higher returns for five crore subscribers, EPFO has so far invested Rs. 42,000 crores in equities fetching over 17 per cent return?

(a) & (b): Employees’ Pension Scheme, 1995 is a self-funded Scheme with contributions @ 8.33 per cent of wages from employer and 1.16 per cent of wages by Central Government. All benefits under the Scheme are paid out of such accumulations. The fund is valued annually and additional reliefs paid if the position of the fund so permits. However, the Central Government has enhanced minimum pension to Rs. 1000/- per month by providing budgetary support keeping the widespread demand in view even though there is no provision in Scheme for such budgetary support. No decision has been taken to enhance the minimum pension to Rs. 2,000/- per month.
Further, as on 26.07.2018, the number of pensioners drawing pension up to Rs.1500/- per month is 33, 61,096.
(c): As on 30.06.2018, Employees’ Provident Fund Organisation (EPFO) has invested Rs. 48,696 crore in Exchange Traded Funds earning a notional return of 14.5 per cent.

7th CPC Concordance Table for All Group of Pre-2016 Pensioners: 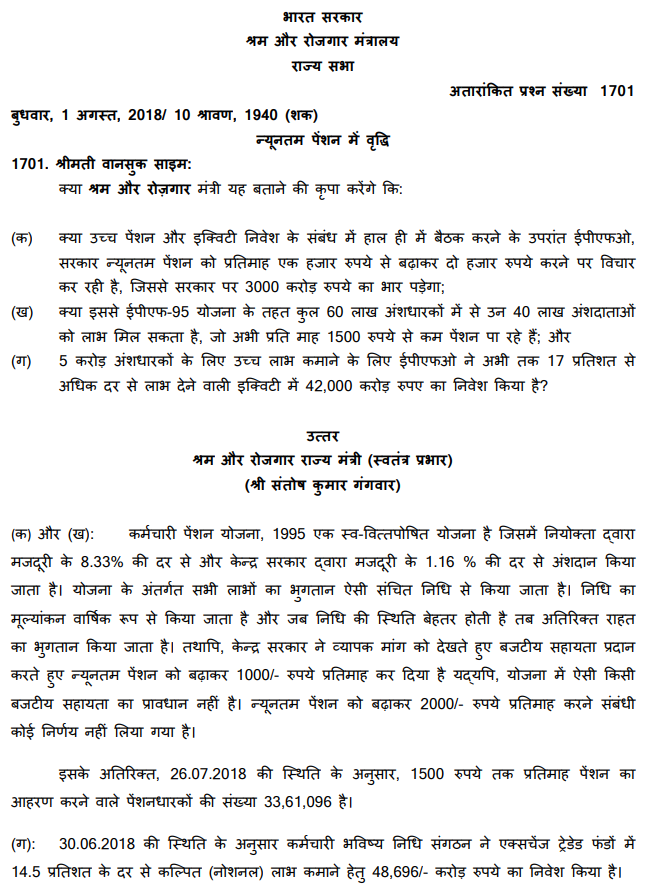